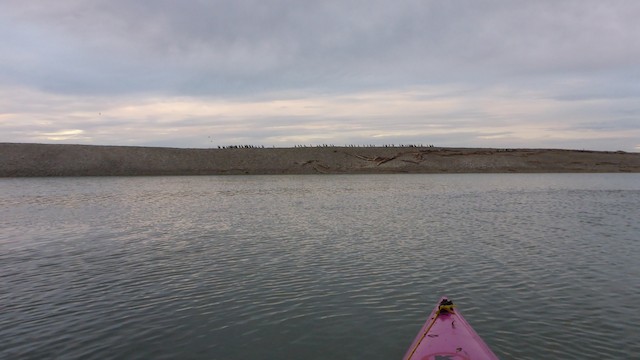 This roost was visited by kayak on the evening of Saturday 5 May 2018 and in the early afternoon Sunday 6th May In the evening theree were 283 Otago Shags. Initially there were about 138 on the lagoon side roosting upslope from 137 Spotted shags. Around 5pm Otago shags from the sea side walked across the top of the spit to join the others. As the evening progressed spotted shags strted streaming in. about 100 before I left the site. The next mid afternoon we revisited the site and only saw 3 Otago shags and 13 spotted shags. On the sea side of the spit there was another 60plus Otago shags. They were very wary of us. Another 13 were waiting offshore in the sea. Single birds were flying in from further out at sea when we left at 4pm. I think the prevailing wind determines which side the shags roost on. Saturday was a light SW, Sunday NE 15 knots. Droppings attested to this being a regular and large roosting site covering more than 100m of the spit in a section that was largely free of wood flood debris indicating that the sea swells overtop the spit in this section in storms. I suspect that gulls and terns also roost here in numbers but they not present in numbers at the times of my visits. No wrecked birds were seen. There were no wheel tracks in the shingle indicating that this spit is apparently free of fisher traffic. One pegged duck shooting stand was not far away on the land side. Not occupied. No structure, just a position. Despite 90minutes of observation no Hectors dolphins were seen. Location in Maptoaster format Group sID sDescription fLat fLong fEasting fNorthing fAlt iColour iSymbol sHyperLink fNZTMEast fNZTMNorth sUTCTimestamp new SHAGROOST 100MNTH -44.929929 171.15035 2363954.2 5584774.8 12.1 255 -41 1454041.6 5023169.4 2018-05-06T03:37:24Z