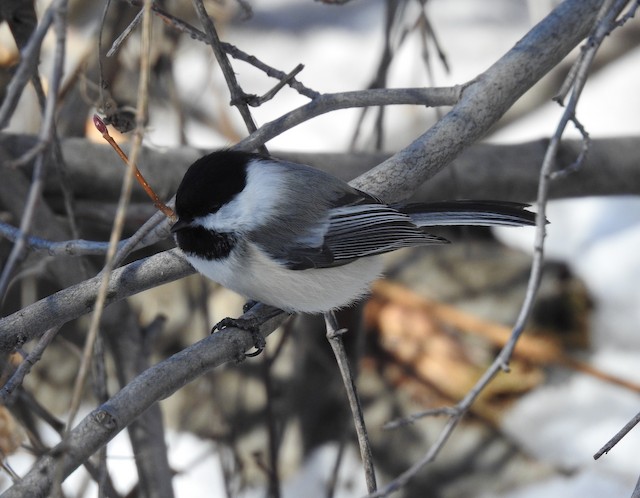 Minimum exact count, including at least 3 singing "fe-be." Heard high-pitched calls from chickadees near the E property boundary along the stream at 0927, at which point I noticed the falcon was gone from its perch. Between this time and ca 0945, observed lots of activity from at least 7 chickadees in this area, including quite a bit of social behavior, with 2 to 5 birds flying around and flitting from perch to perch in a close area. This seemed to include some chases and displacement of birds from perches. For a few minutes around 0948 the chickadees in this area were very quiet, while I heard magpies calling a lot from downstream. Wondered if a predator was around but if so did not find it. At 0952, observed an apparent aggressive chase between 2 individuals in the E part of reach 4, with one close behind the other for ca 10 m. Immediate after, I heard high, soft "se-se-se" calls (different from the high se-se-se predator alarm calls) dropping into a gargle from one of the two - not sure which one. Heard at least 2 of the chickadee group as far upstream as the red culvert. Later, heard a BCCH singing between the diversion and the rocky draw, then observed it foraging near me and got photos and a recording. Wondered if it was perhaps another in addition to the previous 7, but later sightings suggested to me that I could not be sure of that. The snow depth where I observed it along the N bank of the creek was about 57 cm; this chickadee appeared to be solitary, as with the sightings on 7 Mar. Ca 1300, I heard and saw 1 BCCH in the vicinity of the cross-fence, singing and making "de-de-de" calls, only after I had passed by it. Later, I heard at least 2 chickadees near the turnaround, 1 singing. On the return I encountered 2 BCCH at the diversion.