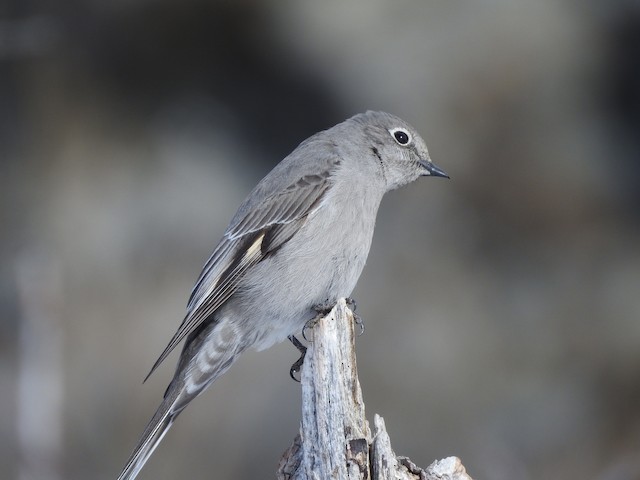 First seen sometime around 1155 or 1200 on the return at the photo point, perched in a Chokecherry about 20 m N of the stream near a steep, rocky S-aspect hillside now bare of snow. Less than a minute after I first saw it, it flew upstream and out of sight. Several minutes later, while I was still at the photo point, it flew back to the big shrubby willow along the stream (which is centered in the monitoring photos I take at the photo point). It was quite active, flitting from perches down to the ground and then back to a perch. Its perches included 2 different places low in the big willow and then 2 places at the top of alder stubs. At least 2 times I saw it flit down to a bare area of grass near the stream, another time down to the snow, and another time down to the bare rocky ground on the steep S slope. Several other times it flitted down near the stream and I couldn't see exactly where it landed or what it was doing. Nonvocal throughout. I wondered if it was finding insects - it seemed to be considerably active, and I suspected the behavior was foraging. Continuing this behavior, it perched again in a Chokecherry near the south slope, then worked its way back towards the big willow. 3 times more I saw it land on the snow for a second or less; 1 of those times I saw it pick a small, dark, nonmoving speck off the snow. The speck seemed rather 2-dimensional and I did not think it was an insect, esp. since it wasn't moving. At 1212 it flew from the vicinity of the big willow more or less due S to the row of Chokecherries ca 50-100 m away in reach 3. By 1213, I was no longer seeing it there, though I didn't see it fly anywhere - perhaps it was down in the Chokecherries out of sight, or perhaps I missed it flying. Weather during this observation period was sunny with broken cirrus and stratus clouds; light air to light breeze from the NE or E.