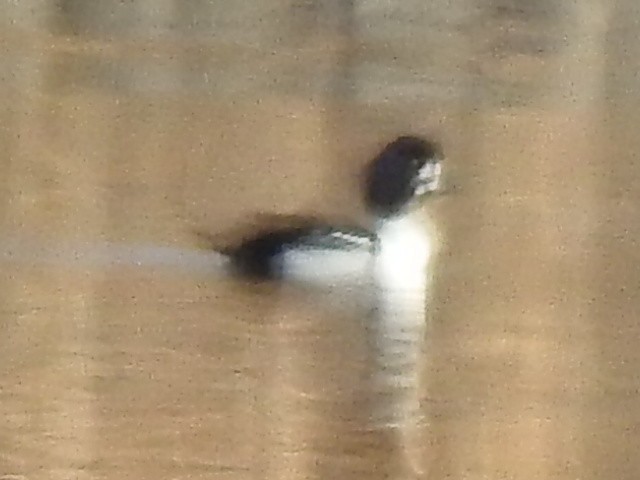 Adult male with 4 Common Goldeneyes (four adult males, one female) at the east end of the lake, toward the southeast corner (along the shore by the rocky dam. Even at the great distance (0.3 mi.). scope views showed diagnostic characters. The white marking on the front of the face was a narrow vertical crescent, quite unlike the round white spot of the adjacent Common males; this mark contrasted with the dark head (which looked blackish at a distance -- I could only barely make out a hint of iridescent sheen, which actually looked more green than purple but was very subtle). The body had more black, both between the white sides and the large white wing patch, and in the form of a black spur which jutted down from the side of the breast almost to the waterline. The adjacent male Commons lacked this dark mark. Even at the distance of observation the bill was clearly shorter and stubbier than those of the Commons. I attempted some photos with my Coolpix P900 at ~80x, not even sure if the bird was in the frame, and came up with at least one marginally identifiable (or at least suggestive) image This is about the fifth Barrow's Goldeneye record for Los Angeles County, with all of the others coming from Quail Lake 2008-2014.