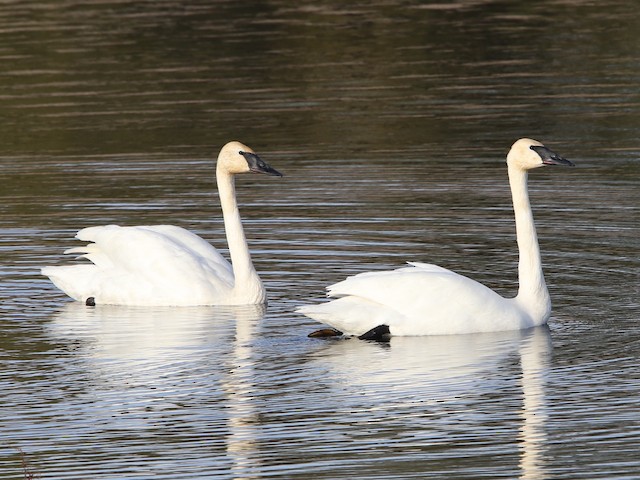 *Mega Rarity for Pima County & Arizona* One previous record in Pima County. Present times: these birds previously reported by Bryon Lichtenhan mid-morning, posted on list server. Two swans immediately apparent on dike separating the two western recharge basins. Joined Bridgette Pollock and watched birds standing, preening, wing stretching/flapping, sitting. At 16:35 they began swimming in the eastern of the west two pond. Behavior indicated they were preparing to flying; they swam as far down wind as the could faced into the wind. It wasn't until 17:26 (50 minutes on the water) that they did fly, to the north northwest appearing (from my vantage point) to follow the course of the Santa Cruz River north. All birders present on the bike path packed up & was preparing to leave when Brian Walsh saw them flying back in 5 minutes after departing. The two swan landed in the east most basin and began floating/swimming around. Details: Obviously swans. Large black triangular shaped bill with red-orange gape and lacking yellow in the lores (which would have indicated Tundra Swan), fairly constant slope from forehead across top of upper mandible to bill tip (slightly concave), sloped flat crown with peak at hind crown, fairly straight (slightly arched) border between the base of the bill & loral feathers, broad pointed border between forehead feathers & top base of bill, large triangular nail at tip of bill (gray nail contrasting with black bill). More details of vocalizations & on water behavior later.