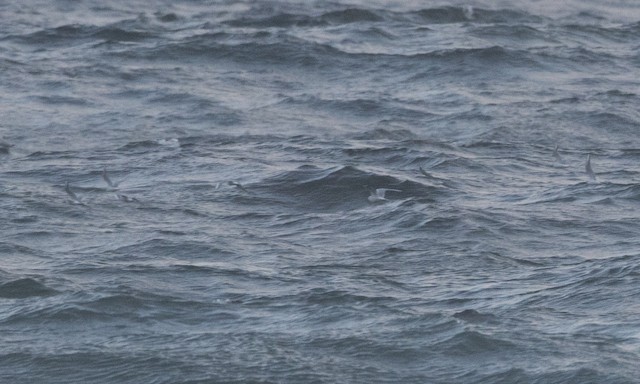 Fifth bird from the left in this flying group. This photo shows the larger size and chestier build than nearby Bonaparte's Gulls, as well as the paler mantle.

Black-headed Gull: Pt. Pinos, CA, 27 November 2017, 0715 Brian Sullivan Notes: Just after dawn a large movement of seabirds was underway due to the passage of a cold front and its accompanying northwest winds. Hundreds of shearwaters and thousands of alcids and gulls were moving, including a fair number of Bonaparte’s Gulls. I was scanning through the scope counting an usually late and large movement of primarily Sooty Shearwaters, when a group of Bonaparte’s Gulls passed through my field of view, but much closer to shore. I estimated the distance of the flock initially to be no more than 150 meters off the rocks. The birds were easy to scrutinize through the scope, so I quickly scanned through them for any obviously different species, as we had already found a few young Black-legged Kittiwakes accompanying these flocks. I quickly picked up on a bird that was obviously larger and more heavily built than the Bonaparte’s Gulls, and a bit longer-winged overall. I recognized the bird as an adult Black-headed Gull, and called it out to the other observers. By that point the flock was just passing our position, and they started to angle farther offshore to round the rocks at the point proper, as most seabirds do during good flight conditions at this location. I was able to follow the bird for about 15 seconds in the scope at close range, during which time I noted the following field marks: size notably larger, with heavier chest and longer wings than nearby Bonaparte’s, which were in direct comparison; overall plumage pattern similar to Bonaparte’s with dark ear spot and white outer primaries, but with slightly paler gray mantle; the underside of the primaries was dusky except for the clean white outer primaries and the overall pattern lacked the neat black trailing edge shown by the nearby adult Bonaparte’s; the bill was clearly red with a dusky tip. I could not determine leg color. After seeing what I needed to see in the scope, I decided to try to photograph the bird. By that point the flock had gotten into the rocky area of the point. I snapped a few photos of part the flock, which had broken into two groups by that time, and managed to capture three frames of the bird in direct comparison with Bonaparte's. These images are terrible, but do show a larger, slightly bulkier bird with a paler mantle than the nearby Bonaparte’s, and I do believe they help support the identification as Black-headed Gull. See image captions for more info. All-in-all it was a brief sighting—probably not more than 30 seconds in total--but the bird was seen well and the appropriate field marks were noted by all three observers. I have seen many Black-headed Gulls in the Northeast, and thousands in Europe, but this was a first for California for me, and if accepted would represent a first for Monterey County. Karl Bardon Notes: Adult bird seen with flock of Bonaparte's Gulls, appeared noticeably larger in size by 20%, had similar upperwing pattern as BOGU with white wedge on outer primaries, but the underside of the outer primaries was dark (excluding the outermost, which was white), a pattern familiar to me from seeing thousands of BHGU previously in other states/countries. Also noted reddish bill and slightly paler mantle compared to BOGU