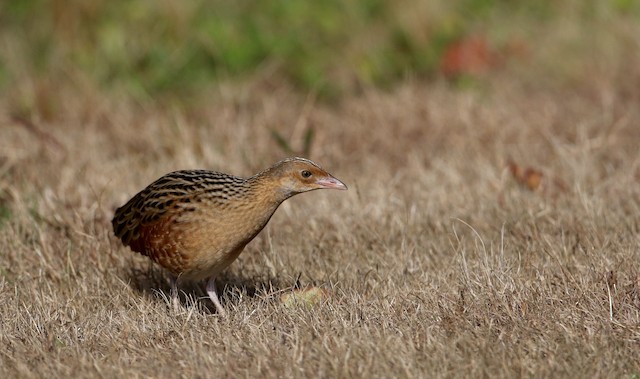 ****MEGA. Continuing juvenile foraging cooperatively along north side of westbound land east of marina. As reported, surprisingly obliging. Foraging actively and in the open almost the entire time I was there, moving slowly and stealthily through the grass and along the edge of the bushes. At least five successful predation events, mostly of large earthworms but at least one small orthopteran. A couple of times the bird jumped and ran back into the bushes, seemingly startled by whatever it was attempting to pull out of the ground. Otherwise unafraid of even the loudest passing trucks and motorcycles, and completely oblivious to the crowd of birders on the other side of the highway. Often closed a bluish eyelid (nictitating membrane?) as it was foraging, and many photos show this, although it often appears more like a reflection on the eye and not as strikingly pale bluish as it did in the field. With short, thick bill and buff pattern on upperparts, the bird appeared much more like a galliform or buttonquail than a rallid. Reported deceased the next morning (9 November 2017), apparently the victim of a vehicle strike. Taken to AMNH where it was prepared the same day and shown to be a male (with testes 5x2.5 mm) and weighing 110g .