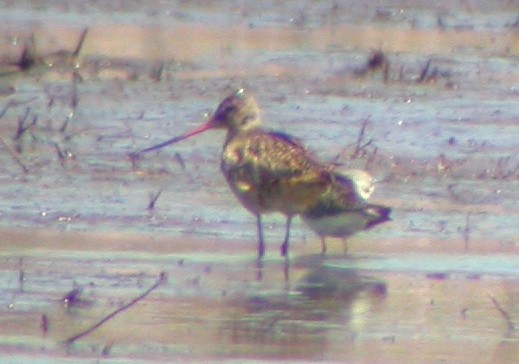 Spotted by Bill Watson. Here is an excerpt from a report I did for the BOS, which was accepted: "As the three of us were scoping the many shorebirds here, Bill stated "I think I have a Marbled Godwit." I soon found the bird and we were able to study it as it fed and preened for a lengthy period. It was larger than all the other shorebirds here with a very long slightly upturned bill, rather long legs, and a chunky body. The bill was relatively much longer than that of a Greater Yellowlegs. In flight the wings appeared long and somewhat pointed. The plumage was fairly uniform overall, appearing brownish buff with darker markings above and unmarked buff below. The underside of the wings was more cinnamon in color than the rest of the plumage. The tail showed thin dark bars. There was no noticeable white anywhere in the plumage. The bill was two-toned - reddish on the basal half and dark on the distal half. The legs were dark."