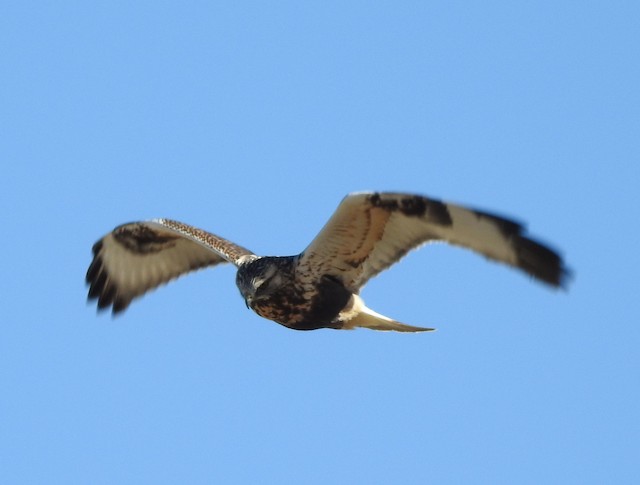 Including 2 *beyond property boundary*. At 0957, I got photos of 3 distant raptors actively circling together over the grassy hills to the SW - I soon lost sight of them but got photos, which revealed all 3 to be RLHA. From 1011 until ca 1027, I saw a juvenile RLHA low over the hills N of the stream in reach 3, facing into the wind, apparently hunting. Given the short time interval between these, I can be reasonably confident that these represent 4 separate individuals. I am not comfortable adding in the 1-2 more individuals seen later to the total, though it seems quite plausible that the three birds spotted early were actively migrating and I did not see them again. At 1112, another or the same lightly marked juvenile RLHA cruised by the rocky draw, heading downstream without lingering. At 1134, I spotted two distant raptors over the grassy hills to the NW. One was definitely a RLHA, and I suspect the other was because I saw 2 RLHA apparently hunting over the grassy hills to the NW at 1144. Between that time and 1217 I saw 3 RLHA in the vicinity, of which at least 2 were juveniles. One seemed to have quite small carpal patches. I watched one bird fly over, heading downstream without lingering. Between 1205 and 1217 I saw 1 juvenile, joined by another, hunting low over the field N of the turnaround point. One caught a small mammal, settled on the ground for a short time, and gulped it down. Both eventually continued on upstream.