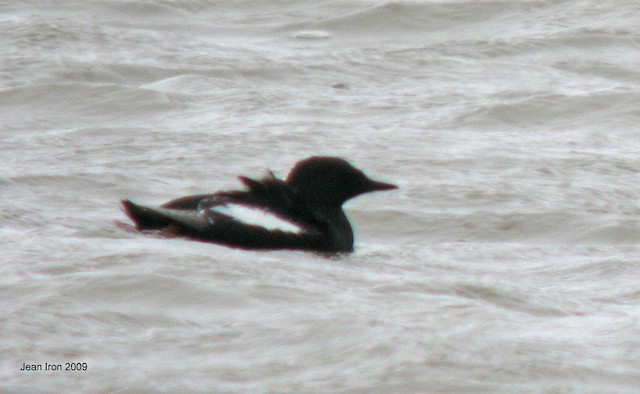 I was with Don Shanahan, Doug McRae and Amy Whitear on Longridge Point close to the mainland. Mark Peck was farther out, closer to the tip where he found the Black Guillemot. We raced out and when we first saw it, it was very close to the rocky shore where Mark was on the gravel ridge. I digiscoped it about 100-200 metres offshore. The water was relatively shallow. Then it flew north and was very close to the gravel ridge among the rocks because the tide was high. We watched it about 15-20 minutes. Description and Plumage: a medium sized black alcid with a distinctive white oval patch on each wing. Its bill was black and slender. Its paler primaries contrasted with the blacker plumage. The primaries were brownish, worn and faded. The secondaries were narrowly edged in white and they too were not completely black and the tips were worn. I suspected it was not in definitive alternate plumage, and that it retained juvenal primaries, secondaries and wing coverts. This was confirmed upon examination of Mark Peck’s photos, and there are a few dark tips to the coverts that form the white wing patch, which were very worn, another character of first alternate plumage. Subspecies: Based on range this is probably the Arctic subspecies Cepphus grylle ultimus rather than the Atlantic subspecies C.g. atlantis. The subspecies ultimus breeds south to James Bay (Godfrey 1986, The Birds of Canada) and there is one Ontario breeding record for Manchuinagush Island west of Cape Henrietta Maria. Ross James (1991, Annotated Checklist of the Birds of Ontario, ROM) assigned Ontario specimens to C.g. ultimus.