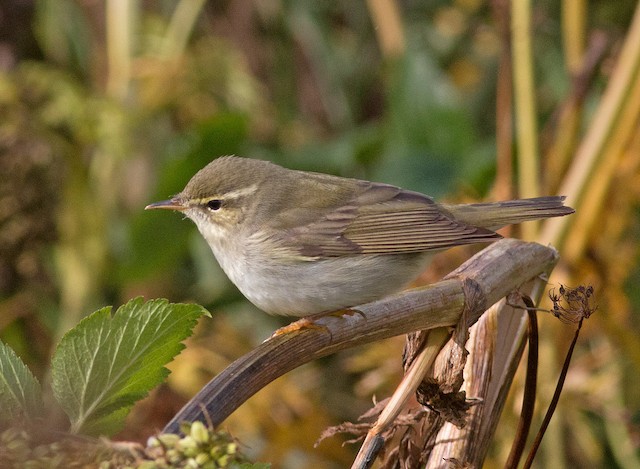 Phylloscopus warbler, dull green above, whitish below, extensive supercilium, large bill, long primary projection. Called once when initially flushed. The call was a loud, hard, clicking or rattling trrrrt. Loud enough to be heard at a distance of 50 feet by Susan C. The call was lower in pitch than Arctic without the tight buzzy quality of Arctic. Sounded more like a truncated Taiga Flycatcher call than any Arctic Warbler call note. Heard well by Susan C. Jesika E., and Jason K. as well. I have been studying Arctic and Kamchatka Leaf Warbler vocalizations after the species were split, the other three were unfamiliar with Arctic or Kamchatka Leaf Warbler call. I played them several examples of both without revealing which species was which. All agreed that it sounded identical to Kamchatka Leaf. Seen at length by all, did not call despite being flushed multiple times. Photos by Cameron Cox. Will attempt to record call tomorrow. I understand the rarity of this sighting as the status of this species complex in Western Alaska is not yet understood. I would not venture this ID except for the fact the vocalizations was a precise match for Kamchatka Leaf.