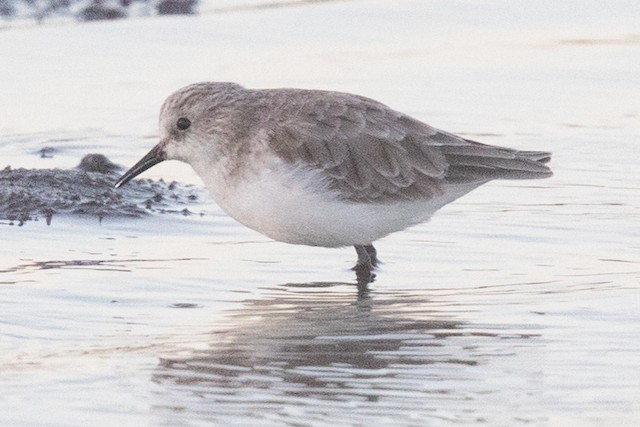 Single bird (presumable same bird previously observed by Blake Matheson on 9/16/17. Bird is a small peep with clearly black legs in basic plumage. The bird showed well next to multiple Least Sandpipers. The bird had a thin, fine-tipped bill, was quite drab/grayish overall when compared to Leasts. It had a similar feeding fashion to the Leasts and certainly was not a tall as any of the Westerns seen during the day. Comparisons of my photos and Matheson's photos show that in my photos the bird has a somewhat darker head, but Matheson noted that the bird seemed to be in active molt so some newly opened feather on the head would likely account for the slight increase in darkness. Comparing my photos and Matheson's reveals some identical wear on some feathers. Western ruled out by size (bird about the same size to approximately 10% larger than Leasts), structure, posture. Semipalmated ruled out by very thin, fine-tipped bill. Also bird being in complete basic plumage in North America would be exceedingly rare for Semipalmated. Bird was seen on the north side of Jetty Road in the extensive tidal flats at low tide. The bird was essentially due north of the bridge you cross immediately upon turning on to Jetty Road from Highway 1. Bird observed from about 60 feet at closest distance, although once it had approached this closely, light was failing significantly.