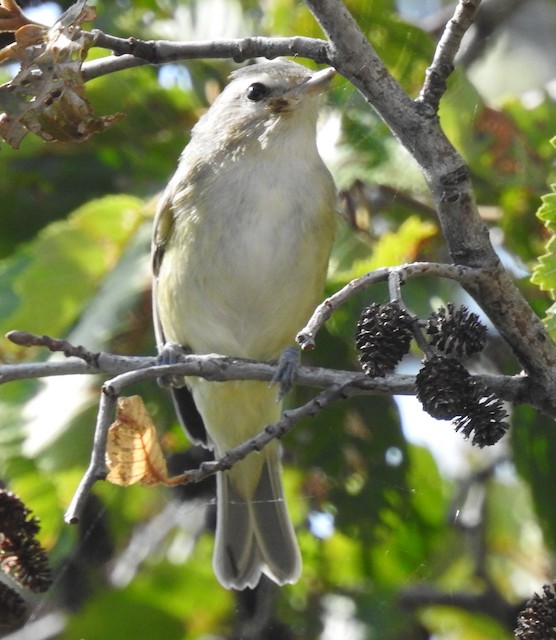 Surprised to observe this many vireos along the creek. First individual seen foraging in an alder along the creek between the diversion and rocky draw, after I heard a suggestive upslurred, harsh "nygrah?" call. Photos. Later (at 1054), a WAVI seen a bit upstream of the rocky draw, apparently foliage-gleaning in Chokecherry and alder. I got one poor photo of this bird. Shortly after, I saw 3 more WAVI at once in the nearby row of Chokecherry, ca 10 m north of the stream. I briefly saw 2 birds perched next to each other, one hunched over and facing the other - perhaps begging? Heard rough calls a few times from this group. At least one of these seemed fairly drab and grayish overall, without so much yellowish underneath, and without as distinct white lines around the eye - perhaps a juvenile? Later, I saw a WAVI near the raised hill (1 poor photo), again in a clump of Chokecherry. I suspected that there were 2 birds here, but did not get a good visual on the second individual, which flew with the first. If all of these sightings were different individuals, and the last-mentioned bird was indeed also a WAVI, then that adds up to 7 birds! However, I was not positive that sighting #2 was not one of the 3 birds seen a short distance away immediately after. While retracing my steps, I also saw and photographed a WAVI in a Chokecherry thicket ca 10 m above the cross-fence, probably one of the birds already seen.