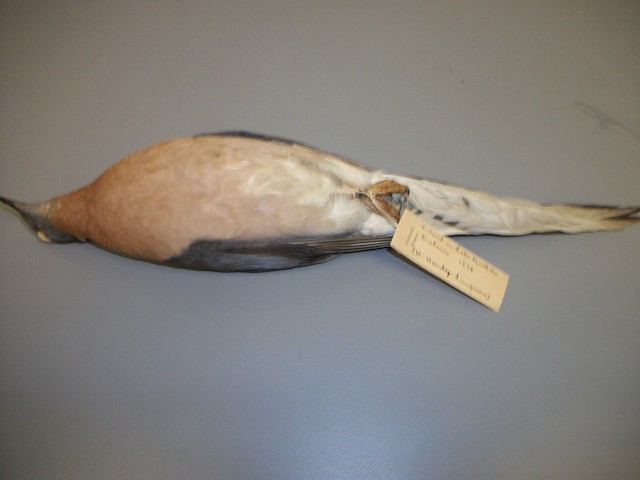 Photo courtesy of the AMNH

There is one extant specimen from Muskoka. An adult male collected by H. Hard(e)y Simpson on an island in Lake Muskoka, sometime in 1876, is now in the collection of the American Museum of Natural History, #474087 (Capainolo pers. comm. 2014). (The record has been entered into eBird as 30 April 1876 with the general location Lake Muskoka). The date on the label attached to the specimen is difficult to read. It appears to read as 1846, but Peter Capainolo, a Senior Scientific Assistant in the Department of Ornithology, states that the “4” on the label appears to be a poorly rendered “7”, and the AMNH catalogue entry gives 1876 as the date of collection. The name of the collector is also difficult to decipher. It appears to read H. Hardy Simpson, but it can also be interpreted as Hardey. In the AMNH catalogue it is given as Hardey. H. Hardey Simpson was a minor British painter who was active 1883-1905 and is one possibility. There is also a reference to H. Hardey Simpson observing an Osprey in Notes on Shropshire Birds (1885). The specimen was originally part of the zoological collection of the wealthy British banker Lord Walter Rothschild. Rothschild established a private museum in 1892, and his collection of bird skins and eggs, insects, mammals, and reptiles grew to be the largest zoological collection ever amassed by an individual. In 1932, Rothschild’s collection of over 300,000 bird skins was purchased by the American Museum of Natural History (www.nhm.ac.uk; Capainolo pers. comm. 2014). There are several early statements regarding the status of Passenger Pigeons in Muskoka. In “Muskoka Notes” published in the 3 April 1875 issue of Forest and Stream, Joseph Scott of Gravenhurst wrote that “wild pigeons have not made their appearance yet; expect them in another week or so.” In his memoir of his time spent at the Harston Agricultural School on the shores of Buck Lake and environs from 1878-1881, Frederick de la Fosse (2004) wrote that “when we first went to the district one of the chief features of bird life was the marvelous number of wild pigeons to be seen everywhere. All around the shores of the lakes there were large flocks of them. In a year or two they suddenly vanished and never returned." Alfred Kay reported that he had found one nest in 1878 at Port Sydney (Mitchell 1935). It is not known from this statement if Kay was referring to a single nest or a colonial nest. The same year they were reported nesting in large numbers at Dunchurch, 27 miles north of Parry Sound (Mitchell 1935). An early unknown Huntsville observer reported that they were numerous and destructive to crops” (Mitchell 1935). The only fall record is of a male that was shot by Alfred Kay at Port Sydney in 1888 (not 1880 as reported by Mills (1981) (Mitchell 1935). The whereabouts of this bird, if it was prepared by Kay as a skin, are not known. Fleming (1901a) stated that it was “once abundant in both districts, breeding; now, if it occurs at all, only in such small numbers as to escape detection.” By the time formal observations of birds were undertaken by Taverner, Kay, and Fleming, the birds had largely disappeared from this region.