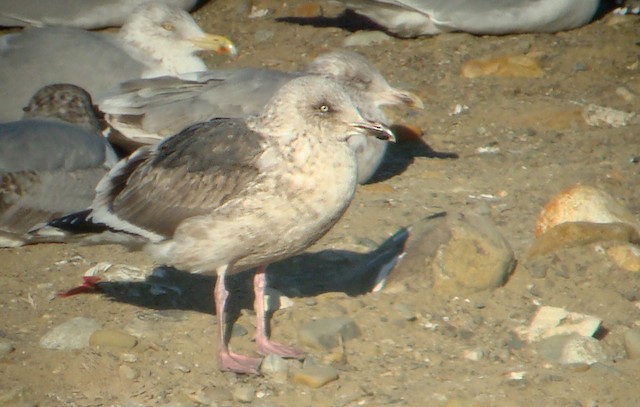 ***MEGA, first state record found yesterday by Louis Bevier. Present this morning from around 8:20-9:15, then disappeared for the rest of the day. I initially spotted the bird among the large crowd of gulls in the trash around the tractor, and we continued to follow the bird, losing it for 5-10 minutes at a time, until all the birds flushed and started to slowly disperse to who-knows-where. Quite similar to Herring Gull in size, though with a somewhat more rounded head and chunkier, more pot-bellied appearance. Probably a third-cycle bird, especially due to primary pattern, though it has not replaced any coverts (?) Scapulars and mantle slaty-gray, between Herring and Great Black-backed in shade and similar to Lesser Black-backed; wing coverts worn and medium brown. Very obvious white "skirt", tips of secondaries, in flight and while sitting. Tail white with fairly broad, though uneven, black subterminal band (white tips to rects). Primary pattern obvious in flight, both in the field and in photos: already showing the oft-mentioned "string of pearls", most obvious on p6-8. Pretty bright pink legs, pale staring eye, and mostly darkish bill.