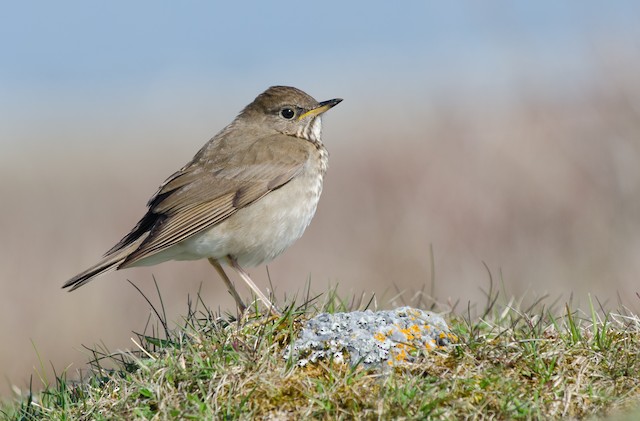 Alix d'Entremont's Comments: No apparent reddish tones on the tail or primary bases in comparison the the remainder of the upperparts. Primary bases and especially the tail appear slightly warmer than the upperparts. The flanks, especially the lower part show, some brown tones like C.m. minimus. P8 is longer than P7 in the folded wing, which is not a match for Bicknell's. Pale base to the mandible pushes past the nostril like C.m. minimus. The earliest arrival of Bicknell's Thrush to New England as stated on Birds of North America (Online) is May 15, so migration timing also favours Gray-cheeked. Wing ratio (length of primary extension past tertials to the length of the exposed tertials) in one image was ever so slightly below 1:1, but two other images resulted in ratios above 1:1, so suggestive of Gray-cheeked. Seems a good fit for C.m. minimus that breeds in Quebec and Newfoundland. Mark Dennis' Comments: Found by Ronnie d'Entremont. Fairly uniform catharus thrush, no real rufous plumage features. extensive yellow on the lower mandible, bland face pattern, slightly grey cheeks, pale underparts, spotted upper breast.