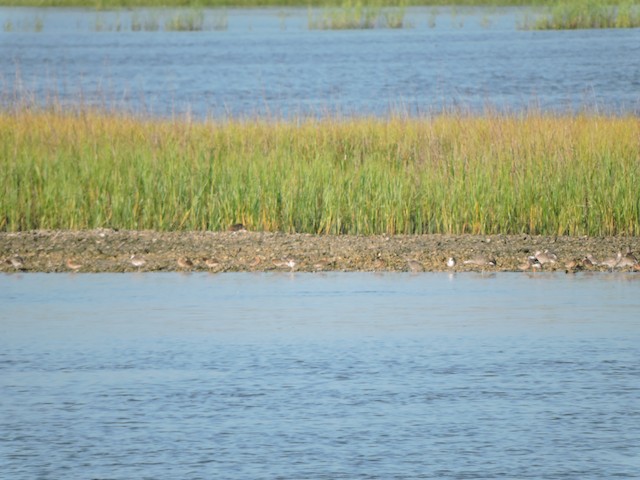 This photo just shows the habitat and mixed flock.

Among one of the shoreline flocks of 10s of willets and short-billed dowitchers (with 100s along that stretch that morning), the bright orange legs of a dowitcher-sized calidris-type shorebird caught my eye. The legs were the color of a ruddy turnstone's but were too long, and they were much stouter than a yellowlegs' legs. The field marks I noticed: the floppy tertials (visible in the shot 2 curled up and against the lighter willet in the background), dark scalloped back feathers, clean white belly and undertail coverts, small gray head, and mid-length bill with the slightest hint of downward curvature. The legs were too orange and stout to be a yellowlegs, and the back was dark and scalloped, not gray and white fine-flecked like a yellowlegs. The mid-length, very slightly down-curved bill, also ruled out the longer-billed yellowlegs sp. The orange legs were too long to be a ruddy turnstone. I could not tell if the bird was a non-breeding male or female since I'm not familiar with this species. There has been a suggestion, based on photo #1, that it is a male white-morph in fall plumage. The bird was standing in shallow water, feeding in the muddy edge, sometimes submerging its head. Location was N30 2.58 W081 21.99, about midway through the Guana-Tolomato-Matazas National Estuarine Research Reserve, accessible only by boat. Of note is that the only other St. Johns County eBird record of Ruff was on 7/10/12, nearly the same month and day. I tried to get a photo but we were slowly motoring in the main ICW channel in a large catamaran. I'm attaching four photos (the last one uncropped just to show context) of the only three shots I managed to get, in the order they were captured. The photos are extremely blurry, taken from a boat with vibrating large diesel engines, from a 17' flybridge with movement, super-zoomed and cropped, through heat and humidity.