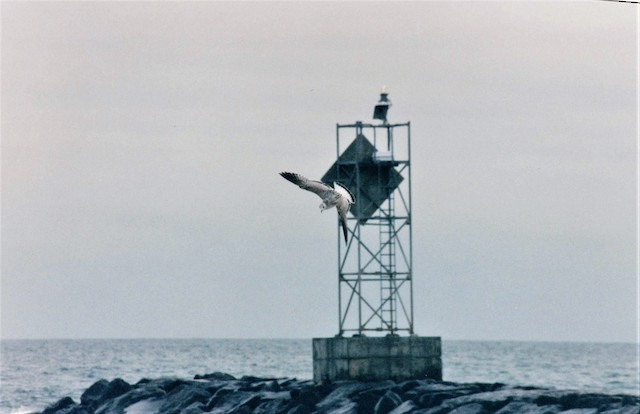 This photo provides an view of the Mew Gull in action, displaying nicely the top side of the wings and the widely spread, attractively marked tail. It communicates the highly active nature of this bird throughout the time we observed it.

All of the photos herewith were taken from the east side of Shinnecock Inlet. This six-photo set of the Mew Gull (Larus canus canus) represents what I deemed my best photos of this very rare gull; all were taken with a 35 mm SLR film camera with a telephoto lens that zoomed up to 300mm (with varied focal lengths across the photos). All of the attached images are crops from the full frame. All are based upon electronic scanning of the commercially processed prints of my film-based photos. Some of the scan images have received some minimal electronic photo processing. That processing was intended simply to make more readily visible details present in the unprocessed photos of the Mew Gull (given somewhat low light and, sometimes, shadowing), such detail being important to judgment of species and subspecies. Thus, the processing involved solely manipulation of light-related variables. In no case did it involve any effort to add to or remove details from the photos or alter structure of anything shown there. I would be glad to provide scanned images of the original unprocessed photos, upon request from any member of the eBird team. The photos provided herewith provide clear evidence that the species shown in them is a Mew Gull of the European form (Larus canus canus) and is neither the species ID-competitor (Ring-billed Gull) nor the subspecies ID-competitor (the western USA/Canada Mew Gull, Larus canus brachyrhynchus). It will also establish this Larus canus canus as bearing first-winter plumage (with some retained juvenile feathering). Details in support of these claims may be found in the remarks associated with individual photos. No member of our party was the discoverer of this Mew Gull (European). It was, according to the 1999 Annual Report of the New York State Avian Records Committee, present in the Shinnecock Inlet from at least February 6 to March 23, 1999. Their discussion of this bird seemed to me to indicate that the original discoverers of the bird were Anthony J.Lauro, John J. Fritz, and Joan Quinlan, and that report noted that many other birders saw and photographed it during its lengthy stay. The species and subspecies of this Mew Gull were noted by NYSARC to be Larus canus canus, based on a detailed analysis of its discriminative features. My own analysis, based on my own photos of the bird fully concur with that conclusion.