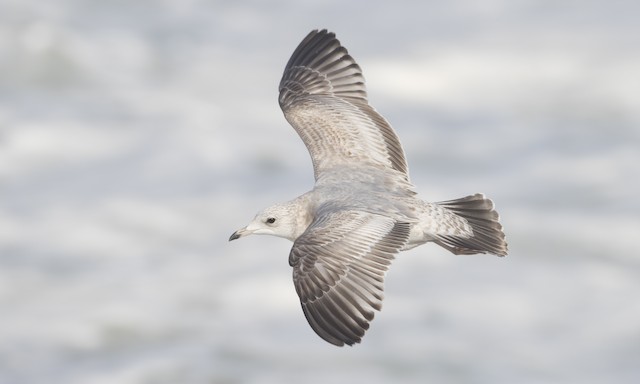 One individual, photographed below, was originally though to possibly be a Kamchatka Gull based on its very Ring-billed Gull-like structure. Here are the original notes: Tentative ID awaiting confirmation. Notably larger, heavier, and more Ring-billed Gull-like than our typical Mew Gulls. Heavier bill obvious in the field, as was larger size than other nearby Mew Gulls. Definitely appeared notably broader-winged than nearby Mews in flight. I never was able to get it in direct side-by-side comparison with other Mews in photos though. Looking for more opinions on this one. After reviewing the recent Dutch Birding paper on this complex, it seems the plumage adds up to clearly favor our regularly occurring 'Short-billed Gull'. Here are some further comments from Peter Adriaens on this bird. "Yes, the bird should be a brachyrhynchus; the soft, velvety brown overall colour indicates this species, and the head pattern (with subdued brown pattern rather than obvious, Ring-billed Gull-like dark spots), pattern of median and some lesser coverts (with brown 'anchors', and lacking contrasting white fringes) and pattern of tail coverts (very densely barred, with dark dominating over pale on the longer undertail coverts) all confirm this. Just goes to show that one should not rely too much on size and structure in gulls... Even so, the structure still looks a bit different from Kamchatka Gull to me, because the body appears relatively slimmer and the whole bird more elongated, even with a 'banana posture' in some of the photos. The bill looks rather thin, and the head is still proportionally small compared to the body."