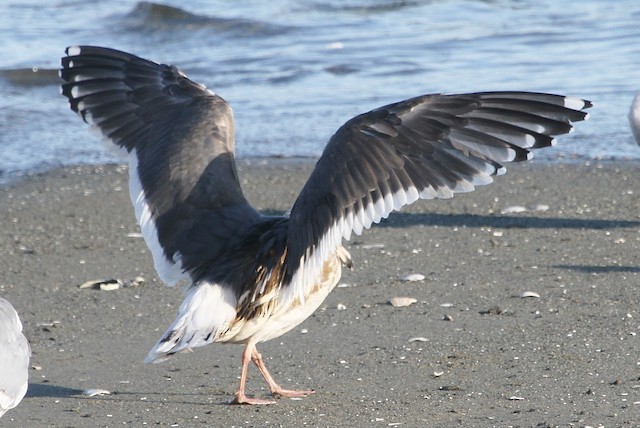 I believe this is the same gull originally found by Bill Tweit and Bruce LaBar. It was at the river mouth beach at Neah Bay to the west of the Senior Center. I observed the bird through my scope at 40 x and through my binoculars at 8 x with excellent sunlight at a distance of 35 to 70 yards. I took pictures and observed the bird for an hour. The bird spent a great deal of time preening and I noted a significant amount of oil tar or some other dark brown substance on the underside of the bird's posterior. This substance is evident in some of my pictures. The bird was easily found as the mantle was notably darker than the Western Gull that were close to it on the beach. The brown streaking on the head and upper breast also made the bird easy to find. The legs looked pink and the yellow bill with a dark tip was looking slightly thinner, but shorter than the Western Gull it was very close to at one point. This gave it a stouter look. The bird had a brown coloration in the area around the eye that looked darker at times depending on the light. The iris was yellow on the deep set eye of this bird. The black outer primaries were contrasting with the white subterminal spots and are evident in my photos showing the wings outstretched. The broad white tertial edges were observed and can be seen in the pictures as well. The tail was not totally white as it showed some streaking. There was some gray on the underwing. I think this was a third year bird given the tail and the other things seen.