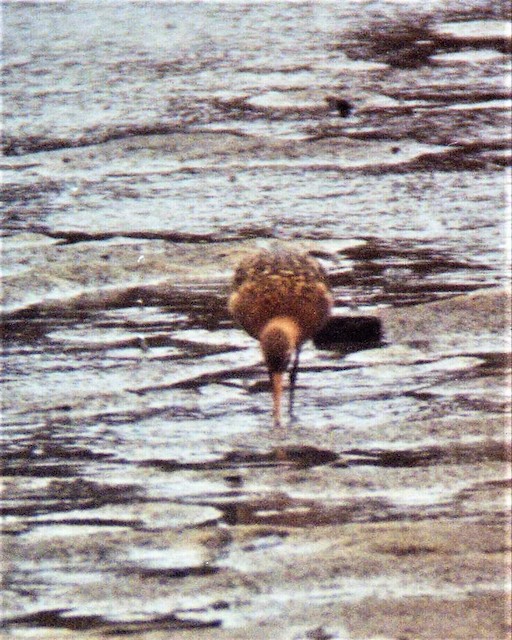 This photo is included here because it provides a good view of how this brilliantly plumaged godwit looked when it was viewed head-on, but with lowered head, making visible the lovely patterns and coloration of its "shoulders" and back.

This photo shows the warm copper "glow" of this bird's long, graceful neck and head,and the deep, brilliant copper barring of its tertials. The brightly colored tertials favor its being subspecies islandica, rather than the only geographically reasonable alternative subspecies, limosa. Very much in favor of its being the islandia subspecies is the rounded head--shown also, and even better, in others of my photos--which is quite different than flat-appearing head of the limosa subspecies. This species' white rump patch is exposed here, as is the straight black border of the back at the white rump patch's upper margin. The black tail rules out its being the descriptively named Bar-tailed Godwit. This photo nicely shows the dark loral line of this species, but that is not unique to this species. The bird above the godwit is a Glossy Ibis. In the field, as well as in this photo, it appeared larger than the godwit.