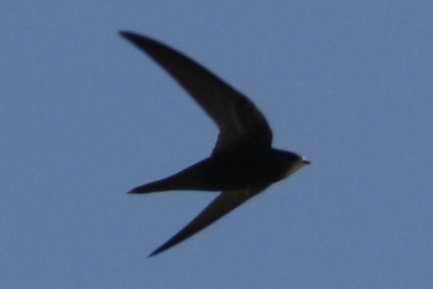 **MEGA. I have spent many hours in the last few days looking into this identification and have concluded that this bird is a pekinensis Common Swift, but any and all comments on the identification are welcome. Below is a few of the best photos, the description from my CBRC write up, and my post to the CalBirds listserve. Addendum: accepted CBRC record #2013-195. Published in Western Birds vol 47, no 1. Field notes: Description from field notes taken immediately after observation: A large dark swift, estimated 1.25x larger than a Black Swift (no other swifts or swallows present for comparison however), and lankier, longer-tailed, and longer-winged than that species. It had a distinct white throat that did not extend into the upper chest, but did reach the forehead slightly. The edges of this white throat patch were somewhat blurred, not extremely sharply defined. The underwing coverts had some white scaling that was most apparent as a thin pale bar down the middle of the coverts (my impression in the field is that this bar was on the greater secondary coverts, but the photos show that it is on the tips of the median secondary coverts). The rest of the body was dark brown. The tail was fairly deeply forked, perhaps to the same degree as a juvenile Barn Swallow (i.e. a deep fork, but not outer retrices not greatly elongated). On a few occasions I saw the dorsal surface of the bird and it looked entirely dark, although the rump may have been slightly paler brown than the rest of the bird. No calls were heard. The bill was tiny. The feet were not visible. The bird flew with frequent bursts of wing beats interspersed with short glides. The wings went very high above the horizontal plane when flapping, but I don¿t recall how far below they went. I believe were held just below horizontal when gliding, which is supported by some of the photos. Pallid Swift can be eliminated by overall color, structure, lack of fringing to upperwing coverts, and lack of black mantle saddle. Nominate Common Swift should be paler, have a dark forehead, and less white in the throat. The very black coloration, extensive white throat and forehead, and white fringing on underwing coverts all point towards pekinensis Common Swift. Photos. None have had the color/contrast adjusted: