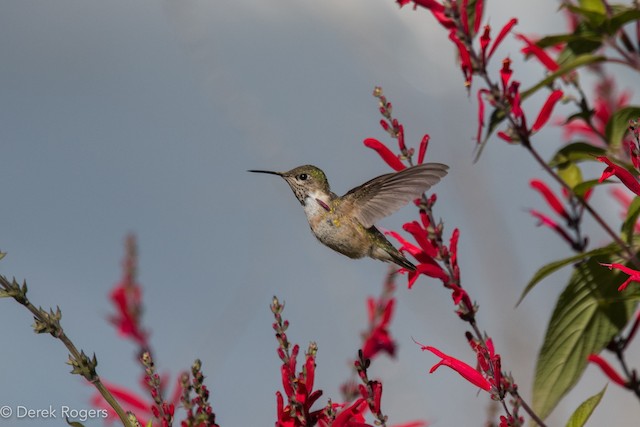 On or before Nov 15th a Selasphorous hummingbird species, quickly identified as a Calliope Hummingbird, began visiting a feeder at a private residence in Water Mill. Unfortunately, since the resident is not full time at this location, this fact was not made known to the wider public. This bird appears to be a young male in pre basic 1 molt. All flight and tail feathers still well intact with the beginning development of its magenta gorget feathers. Mostly green spotting on the throat with a cluster of magenta spotting in the center. Metallic green/bronze above with pale/buff washed underparts and faint buff breast band. Short, square tail with restricted rufous, limited to edging on upper rects. Bird was feeding on Pineapple Sage plantings, appeared to completely shun the sugar feeders throughout its entire stay. More detailed comments on molt and plumage will be submitted to the New York State Avian Records Committee. Attached are several images taken on 11/18/2016 along with some clear audio footage.