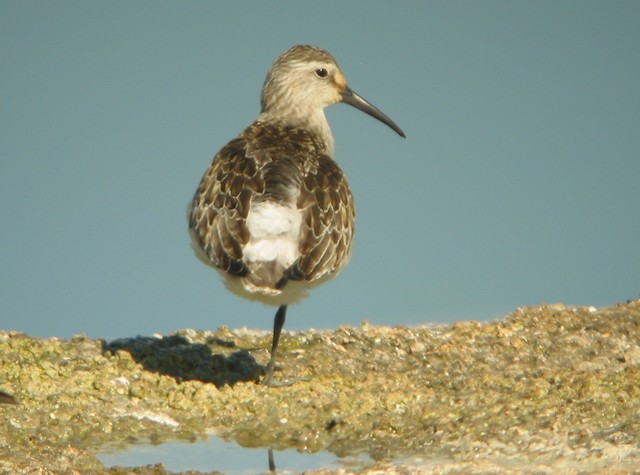 Text from Birder's Diary: Crippling views at Smurfit-Stone in Missoula. Slightly smaller than pectoral, white rump when it flies and preens. Noticeably decurved bill but maybe not as decurved as I thought it would be. Just not "dumpy" looking like a Dunlin. More like a Stilt Sandpiper with black legs. Nice white flanks, belly and untacs. Buffy around the base of the bill and around shoulder (on the body or on the sides of the neck) just above where the wing is. Well-defined supercillium but it's not white - rather grayish like the rest of the face. Dark, streaked crown. Dramatically smaller than the Black-bellied Plover. Long primaries. Dark loral streak from the bill to the eye. Rather like a gray face with a black stripe through it rather than a supercillium. Probes the length of the bill and often searches under the scum in a sideways maneuver. The white rump is visible in repose especially from a rear view. Light buffy wash across the breast with light streaking on the neck/throat. Dark streaked crown rather like a Brewer's Sparrow. Marks on shoulder reminiscent of on a Western Sandpiper with no connection from side to side i.e. no band across breast. Enjoyed watching the behavior for about 1½ hours! Warm (55º), sunny, no wind, a few clouds. Seen from 30-40 feet with the light from behind.