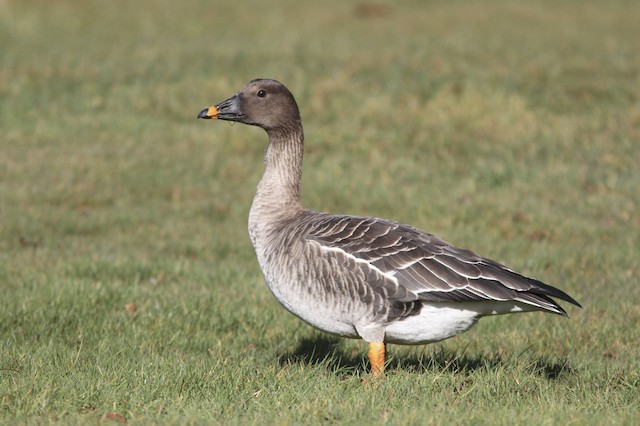 *MEGA* | continuing from 9 Nov 2013, today feeding in the fairway along Main Street. Looks good for Tundra and most likely A. s. rossicus: Bill color: A. s. rossicus apparently can show same amount of orange as A. fabalis, though A. s. serrirostris show greater consistency of exhibiting a narrow (normally covering 25% of the bill length or less) orange sub-terminal band. This goose appears to show a largely dark bill with a narrow sub-terminal orange band, easily under 25% so I believe it is safe to call this out of the range of A. fabalis. Bill size: Based on photos, the whole bill accounts for about 42% of the total head length; within range of A. s. rossicus: 40-43%; compared to A. s. serrirostris: 33-37% and A. fabalis: 43-47%. Bill appears short and deep rather than long and slim. Culmen mostly straight or subtly convex and a slight arch in the cutting edge of the upper mandible giving the bird a noticeable 'grin patch'. Structure: Even when alert, this goose never appears long or slim necked. Head appears round rather than wedge-shaped. No visible 'kink' at the top of the neck as in A. fabalis.