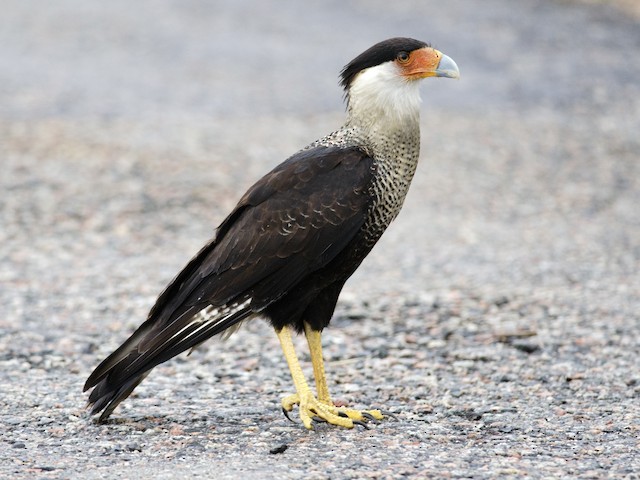 Found by Chris Eagles at an MTO Aggregate Pit south of Michipicoten on November 28, 2016, and seen there briefly by Chris on November 29, 2016 as well as on the lawn of the Kinniwabi Pines restaurant later that day. Steve Charbonneau, Jeremy Bensette, Henrique Pacheco and I drove up through the night, arriving in the area by dawn on November 30, 2016. After a couple quick unsuccessful stops, I decided that birding the streets of the town of Michipicoten would be a good way of searching a bunch of open areas that the bird could be frequenting - 5 minutes later I was shocked to see a long-legged black and tan bird with a black cap walking around a lawn! We observed the bird for about 15 minutes at the intersection of Whitney Ave and Superior St before it flew up into a nearby tree. Fortunately it hung tight in the tree until the other group of birders in the area could arrive (David Pryor, Barb Charlton, Tyler Hoar). We watched it for a while until it flew to the northeast, landing on a lawn at the southwest corner of the intersection of Brock Street and Queen Street. We watched it here until 9:40 AM when we decided to drive home. There is a possibility that this is the same bird present in Munising, Michigan from at least July 1 through November 12, 2016. A straight line distance between Munising and Wawa is approximately 200 km. Interestingly, all three previous accepted records for Ontario pertain to individuals found in July.