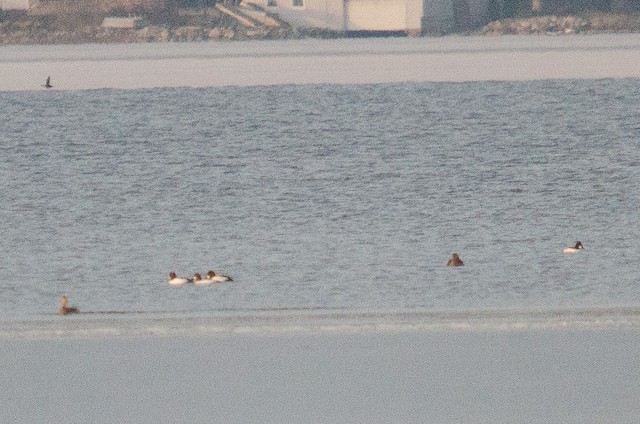 Upgraded to KIEI after identification by Don Sutherland and Mike Burrell... Initial notes are as follows "Female type. At edge of ice W of causeway. At first I thought this was WWSC in dark predawn light but the top of the bill looked too concave. Once the light got better I noticed the following features. Blackish on flanks and back(almost AMBD dark, Likely affected by light but noticeably darker then greyish breast and slightly browner head). Bill was a dark slate grey/black and looked shorter then COEI. pale spot at base of bill ...but not large and as white and contrasting as on WWSC...also lower down around gape as oppose to bridge of nose as in WWSC. Crown appeared to be darker brown then face. Eye did have a pale mark but not long and wrapping around cheek like on some KIEI. Any finer feather detail was not visible at that distance and in that light. Flapped it's wings a bunch of times showing white coverts. Leaning 1st year female KIEI based on head shape and bill colour, and contrasting dark back and flanks. May updrade to KIEI once I get a chance to look at more pics. Hopefully others will find and confirm ID."...Record pics are awful. In second pic KIEI is to the right showing the lighter breast I was referring to and MALL is to the left.