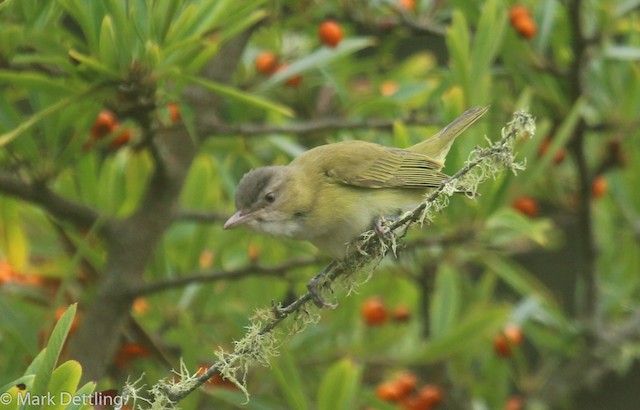 Large vireo with large bill and contrasting gray cap. Separated from Red-eyed Vireo by extensive yellow on flanks, bright yellow undertail, pale, slightly pinkish bill, and weak contrast between pale supercilium and gray cap. It was seen on an unnamed road/path off of Elm (to the north) just before (to the east) of the BPUD building. It's the first gravel road after Kale on your right. It is marked with a "Not a through road" sign, so don't drive on it. You could probably park at the BPUD building and then walk down the road. I first saw it in some fruiting trees, happily feeding. It later became much harder to relocate and was sitting tight deep in a small tree. There was a large flock of Yellow-rumps that it was loosely associating with.