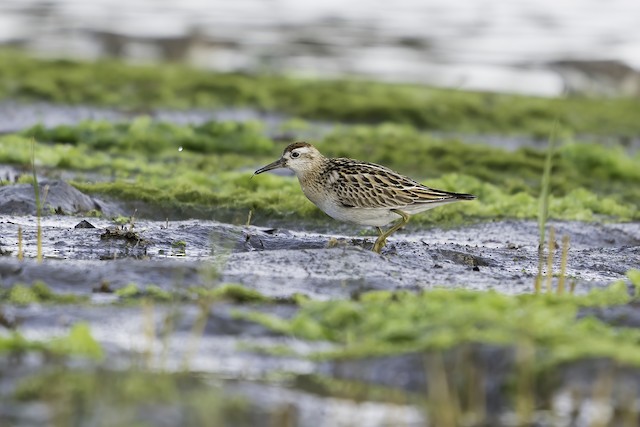 Continuing beauty first found on 10/16 by D. Wimpfheimer. Juvenile, seen on both the north and south shore of the estuary creek area where it starts to open to the larger section of the estuary. Great looks here (38.0293461, -122.8894870), after it flew in and landed on the south side, approximately 25-30 ft. from where I was standing with a group of four others. Total stunner. First seen dorsally as the bird was walking on mudflats, and picked out at a distance due to the noticeable white braces and rufous coverts, in addition to the bright rufous/rusty crown. When found again later on and the bird was facing the group, the warm tones and lack of streaking on the breast were evident, even at a distance. After the bird flew in closer, additional features were noted such as; relatively dark bill; white eye-ring; broad white supercilium; warm tones to the nape; subtle thin streaks on the sides of the upper breast; yellow legs; and size (slightly larger and proportionally different than the nearby Dunlin).