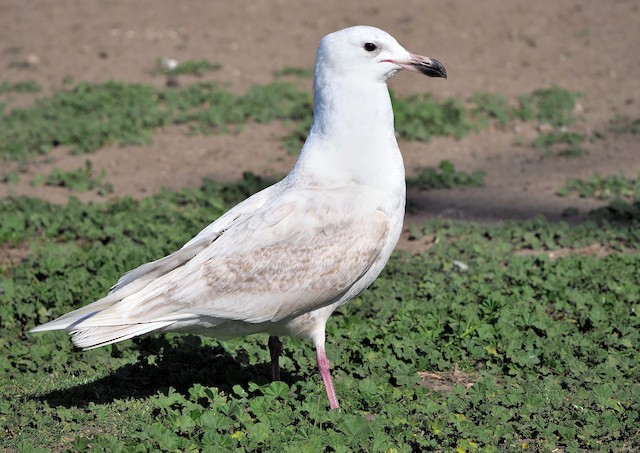 A first cycle Seward Gull perched on building a across from the Elk Club parking area full of RVs. It was frequently flying down and eating bread that people were throwing to the gulls. It is larger than a California Gull, and about the same size of a Western Gull. It is a very pale pearly white, the same exact shade as a first cycle Glaucous Gull, and lighter than the bleached Glaucous-winged Gulls surrounding it. It has pink legs, a dark eye, and Primaries that are the same shade as the mantle. In flight, this gull appers to be a Pure Glaucous Gull, and when I first saw it in my bins that's what I thought it was. The bill is mostly pink, with a black tip and a sizable amount of black running down the middle. This gull resembles a Glaucous Gull in many ways, but the bill is in between that of a Glaucous and a Glaucous-winged Gull's bill. Glaucous Gulls always have strongly bicolored bill's in their first cycle, so it must be a Hybrid. A really neat bird that gave awsome looks!