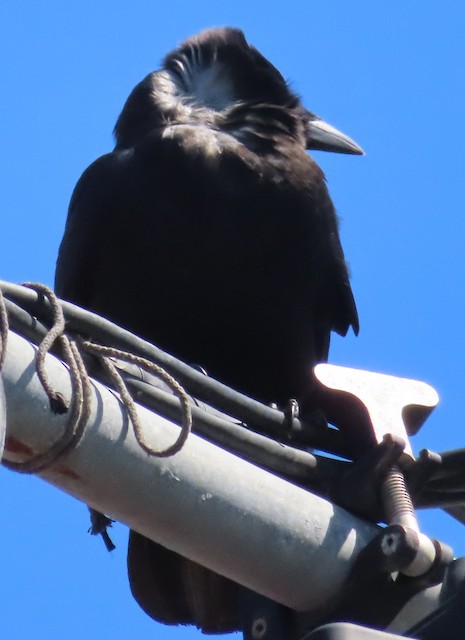 Note thick bright white under feathers (like Chihuahuan ravens have) but SD outside their range. Not sure if crows have this. Made odd clicking noises at seagull.

Raven making click calls and then probably it's mate came and they began calling to each other and were making more caw type noises. Audio and photos will be uploaded shortly. UPDATE: I just looked at the photos and I don't think these are Common ravens, but I don't know what they are. The one I got the photos of has tons of white inner feathers like Chihuahuan Ravens have, but they supposedly don't live here. And it's beak is not as curvy as a raven's beak, but it's got some long nasal bristles in one photo. And then it has this white furry undercoat that's super fluffy and thick and white, and I cannot find any photos of any American Crows or Common Ravens with similar white feathers underneath that is as contrasting and intense like this bird has. I've also never heard any crows make clicking noises like this bird made but perhaps it's just a first. In any case, since I'm no longer confident in saying this is a common raven, I'm changing this from common raven to crow/raven sp. See photos & audio file.