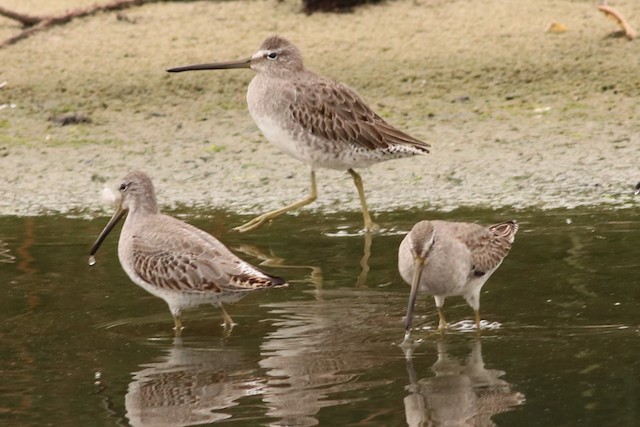 Edit 10/11 after careful review. Had checked dows on pond with Mike Scheibel, looking for WIPH. I walked to the marsh lookout platform and on the way heard a few "kik" notes, decidedly higher than SBDO but not as sharp as I'd like. 6 birds flew in, photos show at least one to have a solid gray hood, white armpit, and somewhat longer bill (another bird next to it has a comparable bill but nothing else is visible). I called Mike to let him know they may be heading to him at the pond. I watched the dows at the pond for a while after. I became suspicious of two. All were cooperative, seen at close range, and would often fly briefly to the other side of the little pond and back. Here's what I see: Call: I had read that LBDO make continuous twittering noises while feeding. I was hearing this today, but I had heard it on other days here too. I eventually heard the twittering coming from an isolated group of ~8 definite SBDOs, so let's call this trick useless. Shape: I still am not comfortable with the whole grapefruit thing, as when birds are probing close to their feet the back arch becomes more pronounced. In general, the 2 suspects tended on the larger, more front-heavy, and rounder-above side, but not obvious. At one point one bird actually got out of the water and ran for no apparent reason, holding its head over its back with beak pointed up slightly (photos). I never saw any others run to compare , but it was hilariously derpy. Bare parts: Beak did not stand out but in taking comparative measurements from photos tends to be obviously longer than SBDO by maybe 15%. The beaks were slightly finer-tipped but could not make any conclusions on color. Legs however were obviously a pure, sickly green, whereas the others were greenish-yellow. Plumage: darker and slightly browner than SBDO. Mantle and scaps show dark-to-light gradient from inside out, with a much weaker white fringe than similar SBDO. This for me is the clincher. Spotting is absent on the belly and even the flanks away from the tail, replaced by thick blurry gray barring. I am still interpreting the few remaining non-winter wing coverts for its age. Tertials are plain (fine for either species if the feathers are new) but one seems to show the tiniest orange interior highlight near the tip, which might indicate they are juvenal feathers and therefore must be LBDO. The few retained coverts have an orange trim with some orange interior marking, which seems to be okay for a young LBDO (see http://vancouverislandbirds.com/asept0925269dowi.jpg). Tail one can be seen to be about 50/50 dark/light which seems fine for either. Wingtips fall slightly short of the tail, which I have heard is better for LBDO, but who knows.