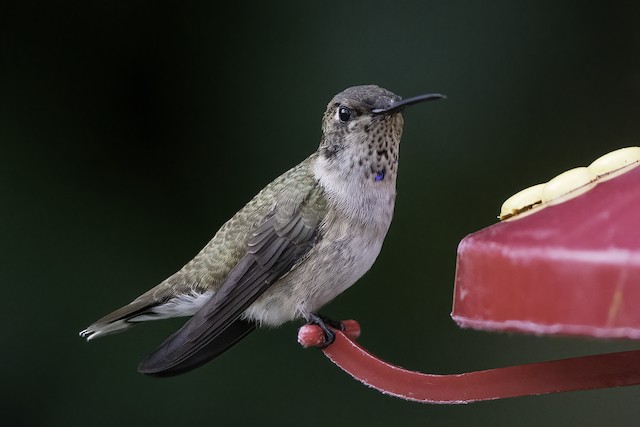 Continuing immature Black-chinned Hummingbirds originally found by K. Hansen on 9/2, I believe. First bird came in at 0913, only a few minutes after my arrival. Seen multiple times over the course of observation. Photos confirmed that two distinct individuals are still present. Due to the fact there were two birds, a BCHU was visiting the feeders every 10 mins or so. So awesome! Keith is the boss’ boss. Archilochus sp. by wing formula and overall structure. Clearly not an Anna's as the two birds were smaller and appeared smaller headed than the numerous nearby ANHUs. Very similar Ruby-throated Hummingbird ruled out as BCHU is more likely at this location and P10 more broad, rounded, and less narrow than in RTHU. Additionally, although not by any means entirely diagnostic, these birds were more drab and green/brown/golden colored overall, whereas RTHU generally appear brighter green/white and contrasty. One bird appeared to have a much more spotted throat and more buff colored edging to the crown feathers, whereas a second bird had much darker crown feathers (lacking buff edges) and less spotting on the throat. Both presumed to be likely HY males.