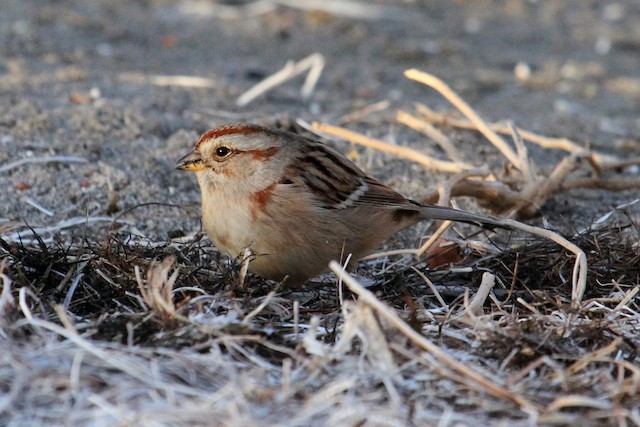 Extremely cooperative and approachable bird. It was frequenting the creek mouth area on the ocean side of the train trestle where it was feeding on short weeds in the sand along the edge of the shore. It would feed hunkered down and would stay in one spot for long periods of time. Noted the rusty lateral crown stripes and the broad, gray central crown mottled with rusty edges. The face and nape were gray. It had a rust colored eye line behind the eye which broadened to the back of the auriculars. The cheek was darker. The mantle was tan with broad black streaks. The under parts were mostly buffy and the central breast spot was subdued but visible with unobstructed frontal views. There was a rusty mark at the sides of the breast at the shoulder. It had a single white wing bar that was visible (upper was mostly concealed) and white on the tail along the outer edges. The bill was bicolored being dark gray on the upper mandible, and pale yellowish on the lower mandible. Photos: