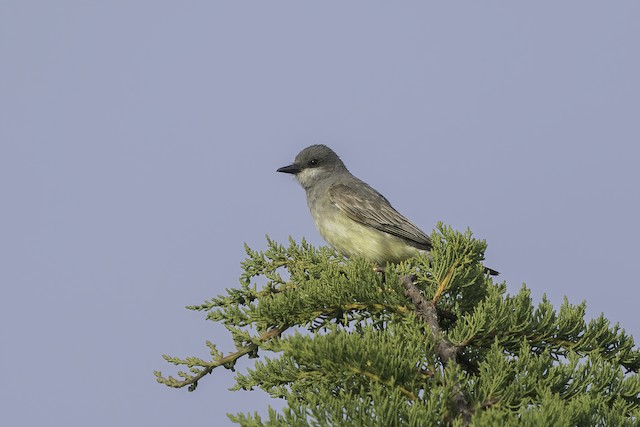 Continuing county level mega found this morning by A. Merritt. 5th county record per eBird, I believe. Huge shout-out to Alex for the find, LC for the heads up, and Everett and Bob for the solid recon. Teamwork makes the dream work. We missed it on our first pass and walked to the tree near the lighthouse steps where Everett had it earlier, without luck. When we returned to the area around the bathrooms, we immediately saw it on the hillside slightly to the north. It then flew close to the path right across from the residence, and better photos were obtained. We then watched it fly into the cypress trees and on the hillside around the residence and path. It would disappear easily, and then reappear in an instant. Awesome looks. ID'ed as CAKI due to lack of white on outer rectrices, white chin and malar, yellow on breast not extending to upper breast, short tail, and overall grayness of the bird. Fairly worn. WEKI and other yellow-bellied kingbird sp. ruled out by the above field marks. Mark got some great flight shots. Preliminarily aged and sexed as adult female due to slightly emarginated outer primaries, not nearly as much as would be expected for an adult male, and juvs lack this feature on primary tips. Open to feedback about age/sex. The bird vocalized very briefly twice, but nothing diagnostic. Sweet bird!