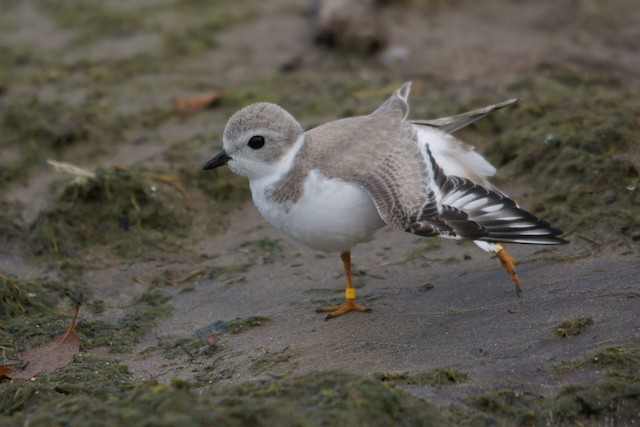 Two continuing juvenile birds, watched for at least half an hour and photographed. Originally found by Gavin Christie on the evening of Wednesday, August 17. Based on band reports of others, these are siblings from the second nest this season at Darlington Provincial Park. They were between the 2nd and 3rd hydro towers (I believe) from Spencer Smith Park, and they stayed within a small area with a sandbar going around a puddle almost the entire time, feeding on a mat of algae. Several people walked right beside them, and one person even biked right by them. In most cases they would just run out of the way, although occasionally they flushed a couple metres. Several times (maybe 3) they walked/ran up to the dry sand from the algae they were feeding on. They did this both on their own and to run away from pedestrians. It was here that I noticed one was limping, hopping on one foot, and lying down on the sand. Just before I left, a boy 'roared' at the gulls nearby which caused them to flush further, to a different spot further south on the beach but still between the same hydro towers. A few minutes later they disappeared just as I was looking down at my photos.