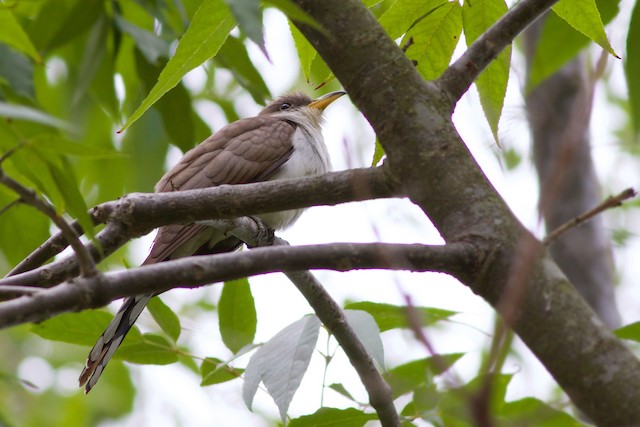 Found by Libby Patten earlier today and possibly the same as one reported 29 June (15 days ago) at Devereux. Ka-ka-ka-ka-kauwp contact calls heard from this bird twice. Photos. Perched in eucalyptus where it preened and scratched. It then moved to an ash tree where after moving around for a time eventually sat motionless for about 45 minutes or more (the ash is non-native Shamel Ash, Fraxinus uhdei, according to L. Ballard). Central tail appeared worn (these often more worn due to exposure but also might have been replaced last summer followed by suspended molt with remaining rectrices replaced on winter grounds, per P. Pyle). Oddly, this bird was scolded by a mixed species flock of chickadees, titmice, hummingbirds, Black Phoebe, and maybe Hooded Oriole and Pacific-slope Flycatcher curious too. Libby Patten found the bird by following the sound of Wrentits scolding the cuckoo. This species is both an intraspecific and interspecific (very rarely, e.g. R-wg Blackbird and doves) nest parasite and may elicit scolding in areas where it breeds. It seems odd that these local birds would scold a cuckoo. Perhaps the shape suggest a predator, e.g. Sharp-shinned Hawk or jay (similar shapes). A medium-large bird (perhaps similar to Aphelocoma jay) but with a longer tail that showed prominent white spots at tips of rectrices. Brownish-gray dorsally with browner wings that when spread (seen in flight and during wing stretch) showed rufous red in primaries. Underparts from chin to crissum soft white. Slaty patch/lying behind eye somewhat vague. Orbital ring skin not noted in the field (not prominent). Bill was orange-yellow on mandible and perhaps lower maxilla. Culmen and dorsal portion of maxilla blackish, this extending to the tip where crossing over to tip of mandible. [Photos show orbital ring to be dull grayish with tinges of dull yellow.] This bird scratched its head with foot directly forward ("underwing"). Rare in Santa Barbara Co. and coastal s. California generally; perhaps <20 records in the past 50 years in SB Co.