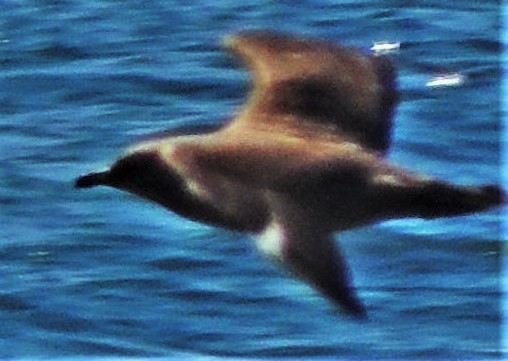 Josh Mrozowski Media from this contributor

Large, dark bird resembling a juvenile gull seen far offshore; at first near a fishing trawler, then near the breakwaters separating the harbor from open water. Roughly the size and shape of a herring gull when compared to a passing great black-backed gull. Noticed white wing flashes so photos were taken, though poor quality and assumed it was another gull. Enlarging photos resulted in a bird with the clear white wing pattern of a great skua, not matching any of the other North Atlantic skua species which could be ruled out anyway due to this bird's large, stocky body. Came in and out of view over a 20 minute period then disappeared. Presumed to have landed on the breakwater, but couldn't locate it among the rocks.