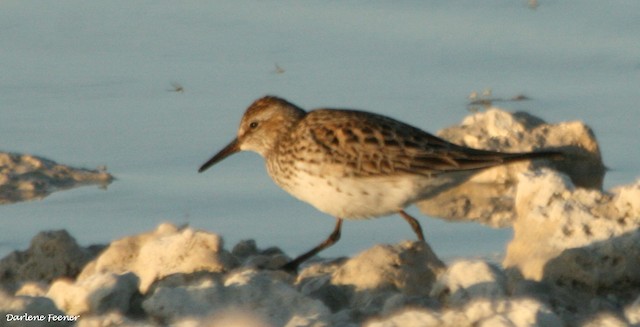 I first saw the bird at 6 a.m. this morning. Took the first photo about 6:01. As I studied it I became more confused. I thought I was looking at a Baird's but it was in the water feeding and I know that Baird's rarely do that. I looked at the photos more this afternoon trying to figure out if I was looking at a White-rumped Sandpiper or not. I did notice that the lower mandible seemed to have some red in it. I knew that was diagnostic for a White-rumped but I thought it was the poor quality photos that I took that the sun was reflecting showing red. I also notice the flanks had some streaking but thought that was probably a plumage variance. I did notice the long primary projection beyond the tail. I figured I would submit the photo under Baird's and some one with sharper eyes than me would know if it was a White-rumped Sandpiper. I knew this bird would be rare. I last saw a White-rumped Sandpiper in Milford. Connecticut on May 26, 2002 so I have not had a lot of experience with this bird. This bird was comfortable feeding along the North side of Crystal Reservoir along the shore line. There was a pool of water that had formed a short distance from the shore line and the Snowy Plover's were going back and forth and then down to the shore line mixing with the White-rumped Sandpiper. The breast of the White-rumped Sandpiper had streaking. Flanks had streaking. Sleek body and short legs. Finely tipped bill. Picking and probing at the grasses in the water along the mud flat portion. Lower mandible had what looked like red on it.