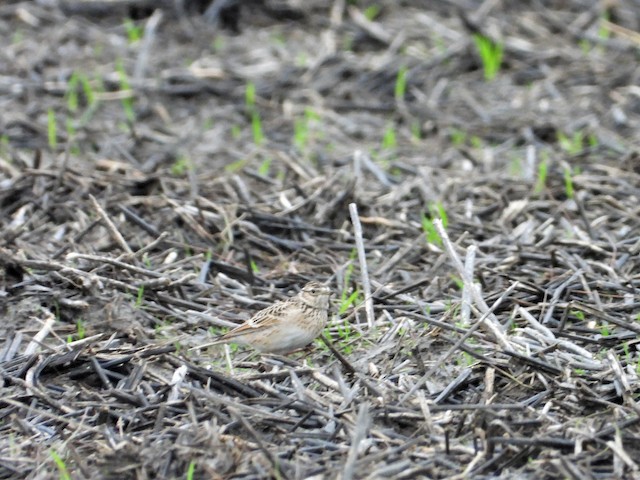 Might indicate subspecies later, but skylark with rufous secondaries, rufous-edged tertials, light supercillium, blackish-centered mantle feathers, band of streaking across breast and thin bill. Size of Horned Lark 😛feeding with Western Meadowlarks. First seen here (40.6424103, -124.2821037) east of Cockrobin Island Rd and spotted later in the same field here (40.6420129, -124.2761579) from Cannibal Island Rd. First Humboldt County record? Upon hearing that Tony Kurz, Lucas Brug & Casey Ryan observed an unidentified flyover bird species from this location on the previous Sunday during the Centerville CBC, I decided to head out and see if I could refind this potential rarity. I sat in my truck in slightly rainy and very windy conditions for over an hour, observing birds flush and fly in and land at close range. Luckily, I was able to pick out this vagrant among the feeding flock as it made its way through the dirt clods and dead plant stalks. Unfortunately, I did not hear the bird vocalize, nor did I hear it vocalize when I refound it for the group of observers at 2pm that same day. I had to leave shortly thereafter around 215pm.