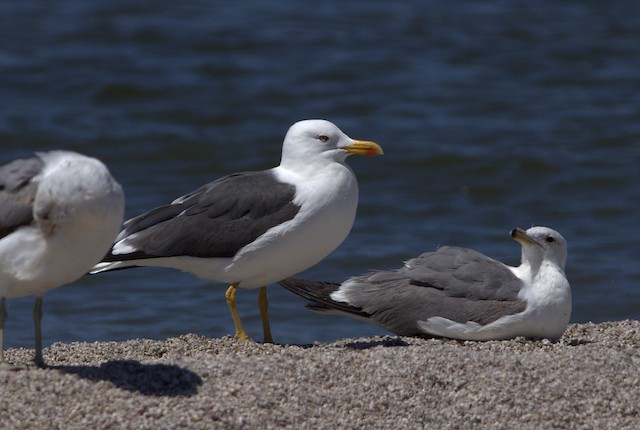 This adult Lesser Black-backed Gull was photographed by Curtis A. Marantz on 17 April 2016 along Salt Creek Beach, Salton Sea State Recreation Area, Riverside County, California. This was the only Lesser Black-backed Gull reported at the site on this date, yet it was one of up to seven birds that have been seen at this site since at least 11 March 2016.

We saw only one adult Lesser Black-backed Gull today among the now much smaller flock of gulls that were loafing on the beach. I personally saw this bird twice, with my second views far better than my initial views. This bird was initially seen sleeping on the barnacle bar, but it later awoke, stood up, walked around, and even drank in the lagoon briefly before walking to the far edge of the bar. I never did see this bird in flight today. This was a medium-sized gull that was a little larger than nearby California Gulls but similar in structure. It had a bill of medium-length and unremarkable mass that had only a weak angle at the gonys. The forehead was steeper than those of some gulls and the crown was smoothly rounded on a head of unremarkable size. The neck was short and inconspicuous, and the body was plump, full-chested, and with a posture that was not much more upright than horizontal. The moderately long wings appeared to cover the short tail. The legs were unremarkable in both their length and mass, but I never clearly saw the feet. This was a pretty typical adult, dark-backed gull in alternate plumage. The head, neck, underparts, and what little I could see of the tail were snow-white and unmarked. I saw no suggestion of streaking on the head or neck. The back and closed wings were mostly slate-gray without any dusky or brown tones on the scapulars or coverts. The exposed wingtips were black, and as such, they contrasted as darker than the rest of the wing. I noted at least some indication of a white tertial-crescent and a row of relatively large, white spots on the tips of each visible primary, which produced a set of at least three or possibly four spots along the wingtip. I cannot now recall seeing clearly a white mirror on the outermost primary, but I did not see this part of the wing all that well. I never saw the rump and my views of the tail were not very good. This bird had a deep yellow bill with a rounded spot of red near the tip of the lower mandible but no apparent black anywhere on the bill. The cream-colored irides contrasted with both a black pupil and a conspicuously red orbital-ring. The legs were a relatively bright shade of yellow, but I cannot recall getting good views of the feet.