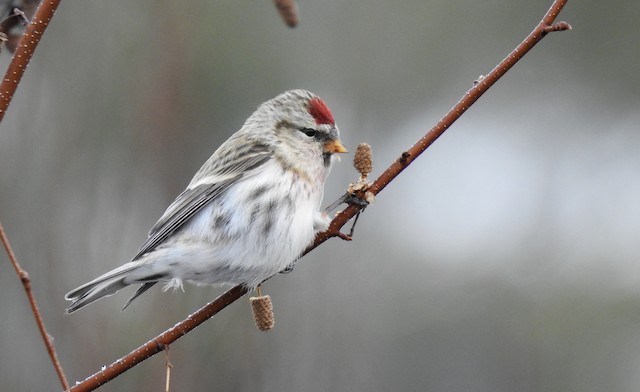 **Rare, but turning up fairly frequently this winter. Amazingly, my second at this spot this year! One pale bird (part of original 7). I originally dismissed this bird as a Common (why??) but now seems more and more like a Hoary each time I look at it. Below are several field marks noted while in the field and while reviewing photos: 1. Pale and lightly streaked face, nape, and mantle, showing light buffy wash 2. Scapulars edged with pale/white, which was not shown by any of the other redpolls I looked at in detail. 3. Light, minimal, and blurry streaking on sides, not accompanied by a brownsish tinge like a typical Common (though some of the male CORE did not show this either) 4. No difference in bill size was noticeable in the field, but I did not pay attention to this. When reviewing photos at home and comparing bill size to other redpolls from the flock, the length of the culmen on this bird is slightly but still noticeably shorter than the bottom edge of the lower mandible. 5. Very faint raspberry blush on upper breast seems to suggest a male, but is unlike extensive reddish of typical male Common. 6. In one photo added here, the rump is partially visible and appears mostly or entirely white. However, only the posterior of the rump is visible, and most Commons I saw showed the streaks on the rump fading to mostly clean white in this area. A few definite Commons showed very pale rumps as well. 7. Finely and sparsely streaked undertail coverts, showing several very fine streaks and one thick central streak. Update 12/14/20: After consulting Louis Bevier, this seems best for a Hoary Redpoll. Louis gave the following details on why this is probably a Hoary: "Your bird here falls into a tweener range but more towards Hoary, in my view. The limited and blurred streaking below and overall gray and white tones sure suggest Hoary to me. You may be right it is a male, and if so, then an immature male. Age is one aspect that helps classify birds: i.e., males are paler and less streaked than females; immatures are more streaked than adults. The single dark streaked undertail covert could be shown by immature Hoary." The more I look at my photos, the more obvious this bird becomes