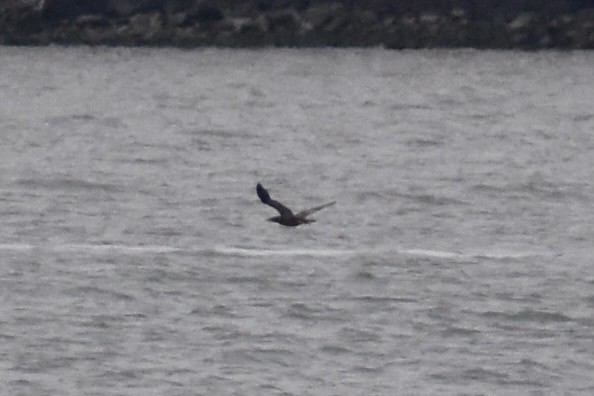 -MEGA RARITY-An eBird New York County first, and likely a historic county record if accepted. At approximately 8:45 - 8:50 am, from the southwest corner of the Dyckman Pier looking north, Nathan O’Reilly spotted a very dark bird with a “funny flight style” approaching us down the middle of the Hudson River along with some Herring Gulls. He immediately asked me to get on it. I connected with the bird somewhere in line with the mouth of the Spuyten Duyvill Shipping Channel. Initially I assumed that it was an uncommonly dark 1st cycle HEGU for two obvious reasons, first because this was a brown bird in late November, and second, it was similar in size to the gulls it flew with. My initial impression was a generically gull-like bird that displayed smoother and deeper wing beats and more angled downward pointing wings. However, It did not appear much larger, lankier, or longer winged than the gulls. Still unconvinced, I watched it very closely trying to dispute the idea that it was anything but a 1st cycle HEGU, even as it got closer. By the time it was nearly parallel to our position, it displayed solid sulid characteristic field marks: a long, nearly equal front and rear projection; long head/bill seemingly lacking a distinction in silhouette between the neck, head, and bill; gradually sloping neck to bill tip that tapered to a point. I continued my skepticism by focusing on observable characteristics rather than trying to come to an immediate conclusion, even as it continued its way a bit south of us. I was at that point certain that it was a sulid sp., but again, still observing it carefully, weary of the possibility of falling into a trap of a false positive. To the possible annoyance of other birders, I didn’t post the sighting to the NYC WhatsApp group until it was well under the George Washington Bridge. By that point Nathan and I already started comparing impressions and were comfortable that it was an immature Brown Booby. Owing to the extreme unlikelihood that this was in fact a BRBO flying south down the Hudson River, I consciously reported it to the WhatsApp group at 8:52 am, as a sulid sp. I did this with the concern that a definitive ID might prevent other birders from coming to their own conclusions. I thought there would be value in comparing multiple unmediated impressions of this bird. Whlile some of our shared impressions describe sulids generally, others describe features specific to an immature Brown Booby. Here are the observations that Nathan and I described to each other- and agreed on, that we felt ruled out a 1st cycle Northern Gannet. Some of these qualities overlap with sulids generally, while others are distinguishing: about the size of HEGU, of which it was initially flying with a small flock; did not appear extremely long, lanky, or long winged; more angled sharply pointed wings; deep unhurried wing beats; a smooth flap flap flap glide flight style; long head and tail projection; tendency to point bill in a slight downward position; uniformly dark brown lacking and noticeable contrast to the neck, belly, upper wing, or rump; whitish underwing but not displaying a strong contrast with the upper wing. Notably, Danny Karlson, a local birder joined us at the pier after the bird was past the GW. He reported that he just left James Knox, an experienced birder, at the north end of the Dyckman Ball Fields who told him a Brown Booby just flew past him, flying south down the Hudson. We were not in touch with James. This was his own observation. I am aware, as one expert birder asserted, that the images don’t unequivocally rule out an immature NOGA. I can say that the images taken by Nathan O’Rielly, that show NOGA plumage characteristics are the result of light artifacts of the images themselves, and do not completely describe how this bird appeared in the field, specifically in regards to coloration and relative size. As a result, Nathan and I, based on our careful study of the bird, do not share those concerns. Wether or not our observation is accepted is another matter. The sky was overcast and I believe winds were steady west northwest hovering around 7-10mph; temperature was in the mid 40’s but felt palpably colder.