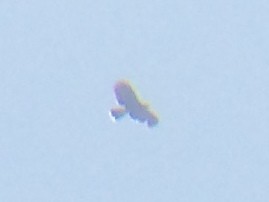 Spotted by Bob Baez. Largeish hawk, dark below with white lower belly/vent bleeding onto the tail, long and broad tail, dark with broad strongly contrasting terminal band and white at the base, even fairly backlit the underwing coverts were contrastingly rufous. Secondaries bulge, giving an S shape to the trailing edge, primaries not really rounded or pointed but what Bob calls a 'radical curve'. This description written immediately after observation with input from all observers. Digibinned photos are terrible but show shape. Good example of when it's better to just watch the bird than trying to get photos!