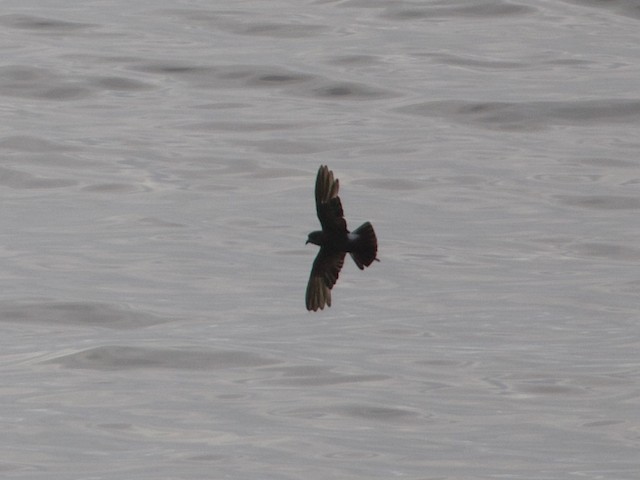 With FTSP on outer shelf just inside (E) of inner part of Grays Canyon; 46.56.05 N, 12443.05 W. Located in an area of current lines with much bird activity and many other species present. Observed from 0834 to 0842. A small blackish storm petrel with extensive white rump first seen crossing the bow from right (starboard) to left (port) about 20 yards ahead of boat. Skipper Phil Anderson was then able to follow the bird while keeping it in sight during the entire observation. Many photos obtained. Description: A small dark brown to blackish storm petrel with bold white rump. The white of the rump looked much more extensive then typical for Leach’s Storm Petrel (LESP) and clearly wrapped below the midline extending to flanks and undertail. This, along with distinctly squarish appearing tail and rather short, blunt, triangular shaped wings gave it a very distinct look and quite different from LISP. Both initially and at several times throughout the observation the bird was with and directly comparable to Fork-tailed Storm Petrels (FTSP). By comparison it was noticeably smaller and stockier. It was shorter tailed and at several points the feet could bee seen to extend beyond the tail. The bird had rather direct flight with shallow wing-strokes and quite distinct from the deeper wingbeat, more zig-zag flight of LESP. Whereas the LESP flight is often described as similar to a nighthawk, this was more swallow-like. On several occasions during flight, the bird would turn and rise up into a stall or stall-like motion before dropping to the water surface and pattering a bit; then it would continue on in directed flight. The bird settled onto the water a couple of times but only very briefly before taking flight again. We left the bird when or slightly after it was chased by a light adult Parasitic Jaeger. Record submitted to WBRC.