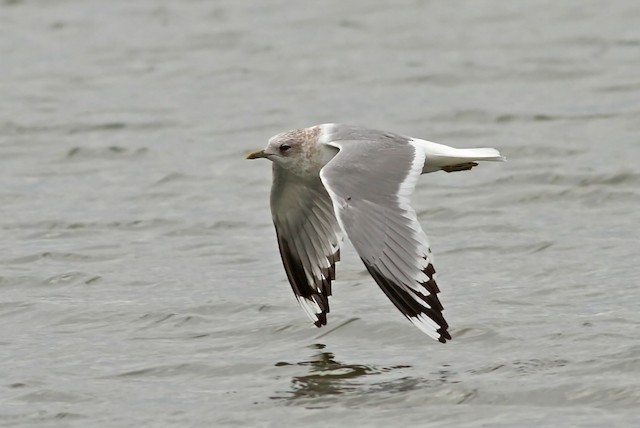 dark flecks on alula may indicate third cycle bird, if not full adult

http://www.shorebirder.com/2016/03/two-gulls-one-flock.html First CT record of "Short-billed" Mew Gull (L. c. brachyrhynchus), 8th record of Mew overall. Exceprt: "Closer inspection of this bird revealed it to be a pretty classic-looking “SHORT-BILLED” MEW GULL (Larus canus brachyrhynchus), also known as North American Mew Gull or just Mew Gull. The English nomenclature can be a bit confusing, so it is much easier to use to Latin names for these forms. The bird was small overall with a particularly long neck and small head. It showed gray upperparts a couple shades darker than Ring-billed Gull, a medium brown iris, a thin greenish-yellow bill with faint subterminal markings, a streaked crown with smudgy brown markings on the neck/breast, and a whole lot of white in the primaries. In particular, p8 had a large white tongue-tip and the trailing edge was quite broad even through the inner primaries."