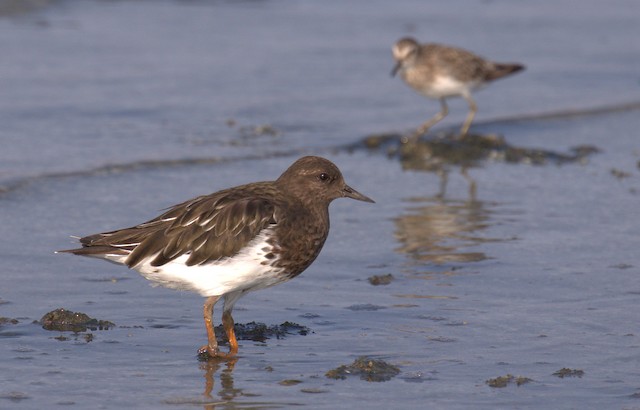 Black Turnstone found by Bob McKernan and photographed by Curtis A. Marantz on 26 August 2020 along the shore of the Salton Sea at North Shore, Riverside County, California.

While we stood near the mouth of the marina McKernan mentioned that he was looking at a turnstone on the beach well to the northwest. We spent a short time watching this bird from a distance before walking up the beach for better views and photos. Upon nearing the small lagoon up the beach, we obtained good views and a number of photos of the turnstone as it foraged on the barnacle beach with the peep. I walked closer and took some photos before eventually flushing the bird, but it flew only a short distance up the beach, where we left it. This brief flight nevertheless allowed me to see the pattern on the spread wings, rump, and tail, and we also heard the bird call once, giving a grating rattle in which the component elements were given rapidly enough to be difficult to differentiate (i.e., it was a more dry but more rapid rattle than the call of Ruddy Turnstone, in which the elements are better separated). This was a relatively small shorebird with a short bill, a small head, a notably plump body, and relatively short legs. More specifically, I noted that the bill was narrowly wedge-shaped tapering from a base of medium depth to a sharply pointed tip along a culmen that appeared to be straight. I further through the bill would have extended backward on the face to a point only a little behind the eye. The forehead was relatively steep, the crown was gently rounded, and the junctions of the crown with the forehead and nape were both more strongly rounded, all resulting in the small head having a blocky appearance. The neck was short and inconspicuous. The body was plump, full-chested, and with a posture that was only subtly more upright than horizontal with the back weakly sloped downward to the tapered wingtips that appeared to reach a point near the tip of a short tail that was difficult to see when the bird was on land. The legs were both relatively short and stout, but I cannot now remember anything about the feet. This was a well-marked bird, but with the plumage coloration representing a sharp contrast between sooty-black and white. My impression was that the entire head, neck, and breast were dull blackish with an uneven appearance, but no obvious pattern. I noted no obvious suggestion of the white facial markings of an adult in alternate plumage on a head that generally appeared to be unmarked. The breast and sides were similarly dull black and without a pattern down to the junction of the lower breast and belly, and the that of the sides and flanks. The belly, flanks, and undertail coverts were white, yet with black streaking that was relatively narrow but well-defined as it extended from the lower edge of the breast and sides onto the upper belly and foreflanks, but the belly, flanks, and undertail coverts were generally unmarked. Returning to the upperparts, the back, scapulars, and closed wings were again a dull, sooty-black in color, and again with an uneven appearance that suggested somewhat darker centers contrasting with subtly paler fringes on at least some of the feathers. Narrow, yet well-defined edges of white on at least some of the scapulars, greater coverts, and tertials produced a more obvious pattern of striping. I had a difficult time seeing the rump when the bird was on land, but I saw enough of the tail to see that it was extensively black, but with a narrow line of white across the tip. When this bird took flight, I noted that the upperparts and wings were mostly black, but with a broad stripe of white across each wing, a white edge up the back, and a mostly black tail. My photos further show a black spot on the rump, white uppertail-coverts, and a white base to the tail. The bill was black, and the eyes were dark enough as to lack obvious contrast with the blackish face. The legs and whatever I saw of the feet were an odd shade of yellowish with flesh tones that were most unlike the bright orange legs of the Ruddy Turnstones I saw later in the day at Obsidian Butte.