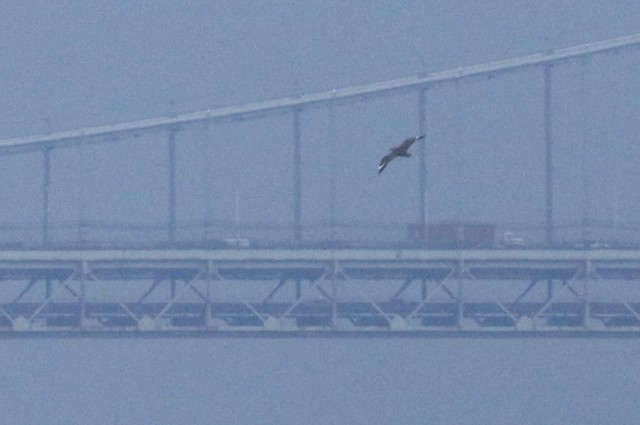 RZ: **extremely rare, storm bird. Got on a large dark bird at 3:52p with obvious white wing flashes heading north while trying to get on a tern that had been called out, initially called/yelled a jaeger before realizing just how huge the bird was and seeing the pale-brown patch on the nape. First seen in line with the pier, rocketing north, closing the distance between 70th St and the GWB in <60 seconds. Headed toward the NJ side of the river and gained altitude as it headed north, last seen by the GWB. Very large, very bulky bird, prominent white flashes near the wingtips, and thick neck with pale nape patch. Broad, pointed, angular wings, short tail, and large head. No discernible patterning on dark brown body aside from paler nape. Interestingly, the only northbound storm bird of the afternoon, riding the high winds. Incredible bird, seen with A. Burke, J. Spindel, and D. Dancis. Lifer. Poor photos tba. AB: Fairly brief and intermittent but pretty good scope views of this bird as it rocketed north with the storm winds. Large, very thick-bodied and winged (considerably chunkier in shape than Great Black-backed Gull). Solid slate gray overall without appearance of any streaking or mottling on the back with a paler nape. White wing patch at base of primaries as is typical of larger Stercorarius spp. was obvious on upperwing and underwing even in the dim lighting and more bright/prominent than I have noted in any of the Pomarine or Parasitic Jaegers I have seen. There was no appearance of two distinct white patches in the wingtip as in Pomarine Jaeger. This bird had the fastest and most dynamic flight of any bird we saw during this storm, taking very rapid, wide turns over the river, increasing altitude with ease as it moved north with the wind. Whereas Parasitic and even Pomarine Jaegers convey a gull-like shape to me when I have seen them, this bird did not give that impression at all due to its impressively girthy body and broad wings, as well as its powerful but easy-looking flight. Lifer.