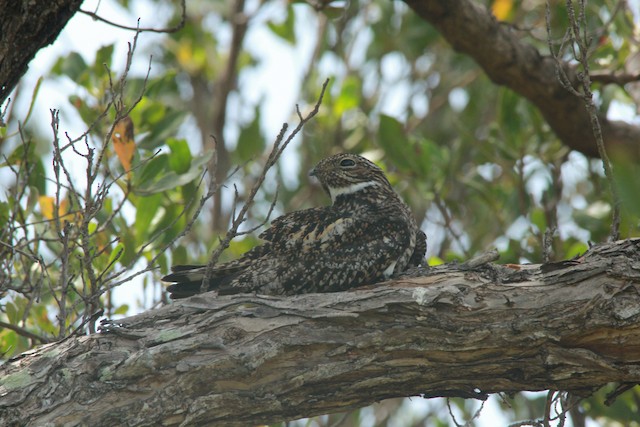 *** David Sibley reviewed the photos and wrote to Bill Rowe. "It’s definitely a male, and based on my study of specimens, which was extensive but 20 years ago, the contrast of distinctly buffy belly with whiter ground color on the breast is diagnostic for male Antillean. That shows clearly in the photos. The number of specimens I found to study was relatively small - only 10-20 or so male Antilleans, and 100-200 male Commons from all over North America (probably only a few tens from the southeast and Florida), so it is possible that this pattern occurs in Common and just wasn’t represented in the specimens that I looked at, but I think there’s a very good chance your bird is Antillean." ***Kevin Karlson reviewed the photos and wrote to Bill Rowe. "Given the worn, abraded primaries that are consistent with Antillean and not Common Nighthawk at this time of year (Common undergoes a mid-winter molt of primaries), and the short primary extension that just about reaches the tail tip (Common typically extends noticeably beyond the tail in relaxed birds like these), and the rounded versus pointed primaries that show minimal space between each folded primary, I would be very comfortable calling this a male Antillean Nighthawk. The diminutive feeling about the bird, including the small rounded head, is more like Lesser Nighthawk, and I have found that comparison to help with perched Antilleans as well." "The coloration is perfect for the migratory race of Antillean Nighthawk. Males of this subspecies typically show a very buffy upper breast and then some pale areas in the central breast before a rich buff color to the undertail, and your bird matches this very well. The small subspecies of Common Nighthawk from Georgia that has a rich buff color usually shows uniform buff underparts, and may not approach the rich rusty appearance to the upperparts that your bird shows. Confidently I feel that this is a male Antillean Nighthawk. I would need some serious contradictory information to change my mind, but I have never found good information in print or online to refute what I just said. "