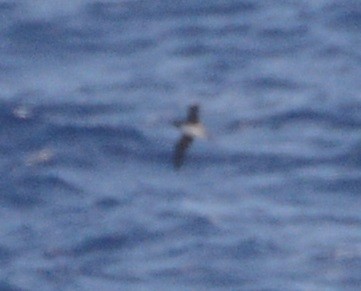 Most identifiable photo I got of this bird which was very distant and I just fired off some shots. I think this was the 3rd ever photographed in Hawaii.

Spotted in distance by Michael after we left the flock. It was pretty far, but since it is rare got out the camera and I think I got some potentially identifiable photos. The bird was a black/white petrel with long thin wings and a pretty slow flight. The bird was dark above, had a dark hood and underwings with a white stomach. The pattern was reminiscent of an alcid like a Dovekie or a murre. The bird is flying left in all pictures except for the top middle picture.